Salmon behavioural response to robots in an aquaculture sea cage 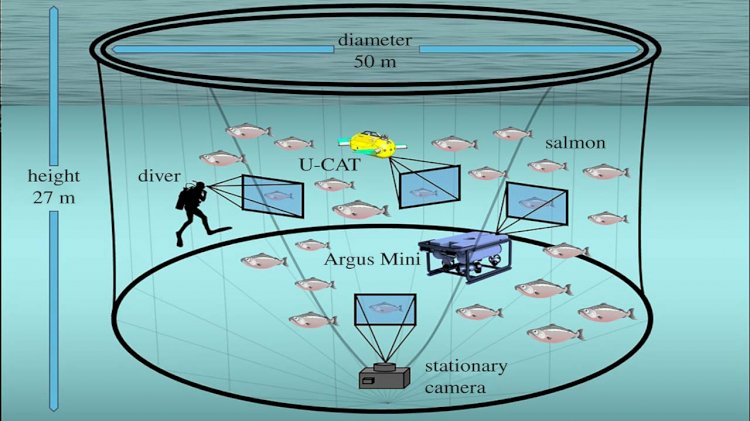 Animal-robot studies can inform us about animal behaviour and inspire advances in agriculture, environmental monitoring and animal health and welfare.

Currently, experimental results on how fish are affected by the presence of underwater robots are largely limited to laboratory environments with few individuals and a focus on model species. Laboratory studies provide valuable insight, but their results are not necessarily generalizable to larger scales such as marine aquaculture.

A sea cage can hold up to 200000 farmed salmon. If the cage sustains damage, such as a hole in the nets, the fish could swim out through the opening and make their escape in short order.

Clearly, the aquaculture industry wants to avoid this scenario. Not only do escapes lead to large losses for the industry, but no one wants farm-raised salmon to mix and interbreed with wild populations.

Keeping an eye on what is going on inside the cages is critical for being able to respond and repair any damage promptly.

Intensive commercial aquaculture brings with it substantial concerns regarding fish welfare. Increased stress levels of compact fish schools may cause aggressive and competitive behaviours. In addition to concerns of animal suffering, stress also makes fish receptive to diseases and parasites and may lower productivity.

Human divers and underwater vehicles controlled by operators on land are commonly used to check the conditions in sea cages. Both types of intruders can disrupt and stress the fish. These methods also limit the frequency of inspections. 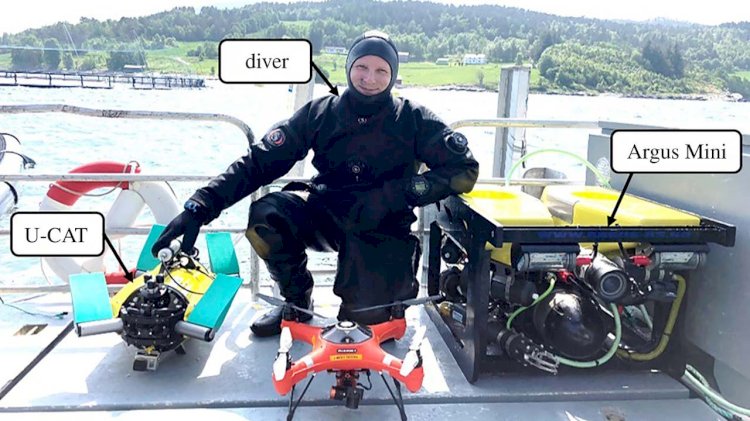 Robotics and biology researchers have been trying to find out which monitoring methods disturb fish least. Researchers observed aquaculture salmon's reaction to the flipper-propelled robot U-CAT in a sea cage with 188 000 individuals. A significant difference in fish behaviour was found using U-CAT when compared to a thruster-driven underwater robot, Argus Mini and a human diver. Specifically, salmon were more likely to swim closer to U-CAT at a lower tailbeat frequency.

Fish reactions were not significantly different when considering motor noise or when U-CAT's colour was changed from yellow to silver. No difference was observed in the distance or tailbeat frequency as a response to thruster or flipper motion, when actuated and passively floating robots were compared. These results offer insight into how large aggregations of aquaculture salmon respond to underwater robots.

The tests that have a robotic turtle swimming around the cage to film the equipment and fish have proven to do the inspection job better and more gently.

The experiments show that the fish are only negligibly scared or stressed by the robotic turtle. They swim calmly and fairly close to the turtle, whereas they keep away from the intruders in experiments with divers and thruster-driven underwater robots.

"The overall purpose of the experiments wasn't just to test the turtle robot, but also to investigate what characteristics robots being used in the aquaculture industry should have. We've found that the most crucial characteristics of the surveillance robot are its size and speed, whereas colour and motor noise hardly matter at all."

The turtle robot's small size and slow movements are the characteristics that make it less disturbing to the fish. The fact that it resembles an organism that lives in the ocean is less important. Kruusmaa says:

"The conclusion turned out to be the opposite of our expectations. The fact that the robot looks like a marine animal doesn't seem to play any role at all. And that's actually good news - it means we don't have to build the robots to be fish- or turtle-like. That will make it cheaper to develop and use robots in this new field of application to monitor marine organisms."