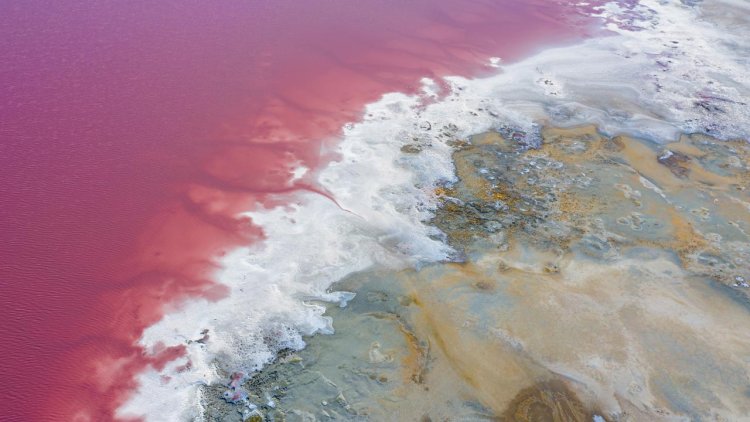 An experiment at a San Diego beach will soon turn the seawater pink, temporarily, in the name of science.

This January and February, researchers at UC San Diego’s Scripps Institution of Oceanography and the University of Washington are leading a pink-hued dye experiment, titled Plumes in Nearshore Conditions, or PiNC, to study how small freshwater outflows interact with the surfzone.

Funded by the National Science Foundation (NSF), the project will focus on the estuary and surrounding coastline at Los Peñasquitos Lagoon, located within Torrey Pines State Beach and Natural Reserve in San Diego, Calif. The first of three dye releases will begin on January 20, with the remaining releases planned for late January and early February 2023.

Rivers and estuaries play an important role in delivering freshwater and materials such as sediments and contaminants to the coastal ocean, but little is known about how these plumes of more buoyant, fresher water interact with the denser, saltier and often colder nearshore ocean environment, particularly as the plumes encounter breaking waves.

By releasing an environmentally safe pink dye in the mouth of the estuary, the PiNC research team will be able to track the processes that take place when small-scale plumes of freshwater meet the surfzone.

“I'm excited because this research hasn't been done before and it's a really unique experiment,” said Scripps coastal oceanographer Sarah Giddings, who is leading the PiNC study. “We're bringing together a lot of different people with different expertise, such that I think it's going to have some really great results and impacts. We will combine results from this experiment with an older field study and computer models that will allow us to make progress on understanding how these plumes spread.”

Researchers will track the fluorescent pink dye from land, sea, and sky using a variety of instruments including drones, sensors affixed to poles in the sand in the river mouth and surfzone, and a jet ski outfitted with a fluorometer—a device that measures the fluorescence or light emitted from the dye. Beyond the breaking waves, several moorings and sensors deployed along the seafloor will measure ocean currents and other conditions including wave heights, tides, salinity, and temperature. 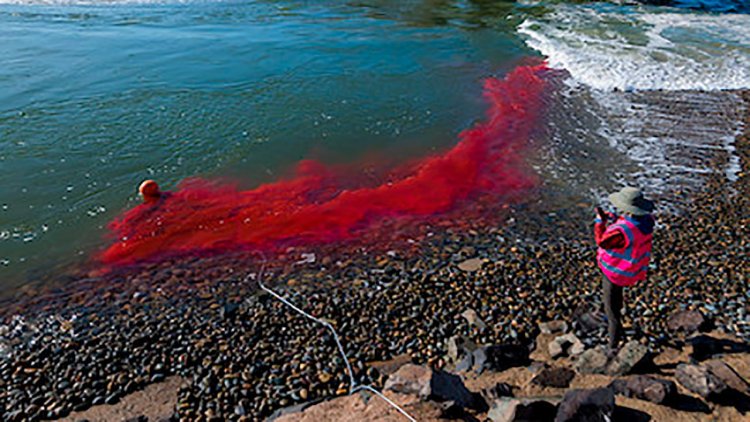 The researchers said the PiNC experiment will provide a first-ever view of the buoyant plume/wave mixing dynamics at play in this particular location, and will lead to an improved understanding of how other small-to-moderate outflows of freshwater interact with the waves at locations around the globe. The results of this study will provide crucial data for quantifying the spread of sediment, pollutants, larvae, and other important material in the nearshore environment.

Giddings noted that many previous oceanographic studies have focused on large-scale freshwater plumes with high outflow, but there's very little research that has been done on smaller-scale plumes that directly interact with the surfzone. The Los Peñasquitos Lagoon was chosen as the study site because it is a “prime example” of a small river plume discharging into the surfzone along a relatively uniform stretch of coastline. The lagoon is a small intermittently closed estuary nestled between the cities of San Diego and Del Mar.

“Los Peñasquitos Lagoon is a very dynamic system, with different elements changing each day, often even over the course of one day,” said Scripps postdoctoral scholar Alex Simpson, a member of the PiNC research team. “I am looking forward to seeing how the balance of physical forces—ocean waves competing against river outflow—determine the fate of the estuary water as it enters the coastal ocean on the days that we conduct our field experiment. I'm also very excited to fly a new type of drone system with a camera that has nearly 100 times the capability to distinguish the visible light spectrum than our phone camera.”

All the dye releases are timed to occur during an ebb tide—the tidal phase when the water level is falling—to ensure that the dye is carried out of the estuary into the coastal ocean. Once released, the pink dye will be visible to the naked eye for several hours after the deployment, with small traces detectable by instruments for approximately 24 hours. The dye is non-toxic, so it poses no threat to humans, wildlife, or the environment. However, beachgoers are advised to recreate further south or north of the estuary on the release dates due to the active research underway.

Scripps Oceanography scientists have successfully used pink dye to conduct other nearshore experiments, including an international study tracking beach pollution dynamics near the U.S-Mexico border in 2015, and earlier work based at Imperial Beach and Huntington State Beach.

The PiNC experiment is sponsored by NSF award #1924005. Complementary data at the same site examining estuarine dynamics and estuary mouth sedimentation is funded by the California Department of Parks and Recreation Natural Resources Division, Oceanography Program. The researchers have secured permits and approval from all necessary agencies to conduct this study.

In addition to Scripps Oceanography and the University of Washington, collaborators on this project include Universidad Técnica Federico Santa María in Chile, UC Irvine, UC San Diego Mechanical Engineering, and the Naval Postgraduate School.