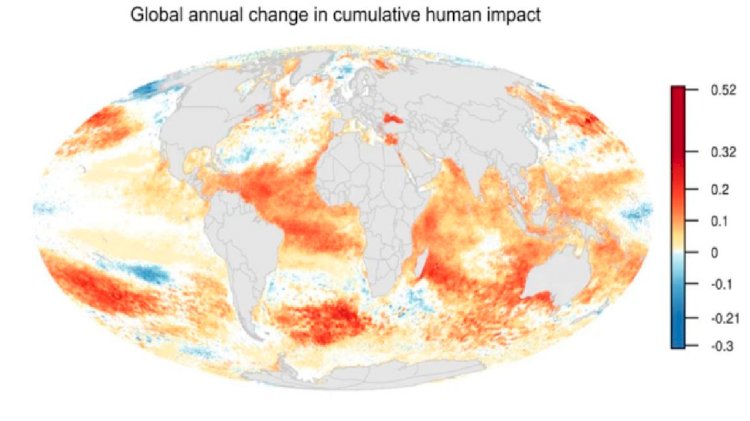 Over the recent decade, total human impacts to the world’s oceans have, on average, nearly doubled and could double again in the next decade without adequate action, says a new study by researchers from the National Center for Ecological Analysis and Synthesis (NCEAS) at UC Santa Barbara.

Published August 12th in the journal Scientific Reports, the study assessed for the first time where the combined impacts that humans are having on oceans – from nutrient pollution to overfishing – are changing and how quickly. In nearly 60 percent of the ocean, the cumulative impacts are increasing significantly and, in many places, at a pace that appears to be accelerating.

Climate change is a key factor driving the increase across the world, as seas warm, acidify and rise. On top of that, commercial fishing, runoff from land-based pollution, and shipping are intensifying progressively each year in many areas of the ocean.

Lead author Ben Halpern, director of NCEAS and a professor at UCSB’s Bren School for Environmental Science and Management, said:

“It’s a multifactor problem that we need to solve. We can’t just fix one thing if we want to slow and eventually stop the rate of increase in cumulative impacts."

The study also projected the impacts one decade into the future, based on the rate of change in the recent past, finding that they could double again if the pace of change continues unchecked.

The assessment provides a holistic perspective of where and how much human activities shape ocean change – for better or worse – which is essential to policy and planning.

“If you don’t pay attention to the big picture, you miss the actual story. The bigger picture is critical if you want to make smart management decisions – where are you going to get your biggest bang for your buck.”

Regions of particular concern include Australia, Western Africa, the Eastern Caribbean islands and the Middle East, among others. Coastal habitats such as mangroves, coral reefs and seagrasses are among the hardest-hit ecosystems.

There is an upside to the story, however. The authors did find “success stories” around every continent, areas where impacts have declined, such as the seas of South Korea, Japan, the United Kingdom and Denmark, all of which have seen significant decreases in commercial fishing and pollution.

These declines suggest that policies and other actions to improve ocean conditions are making a difference – although, the analysis does not attribute specific actions to those declines. 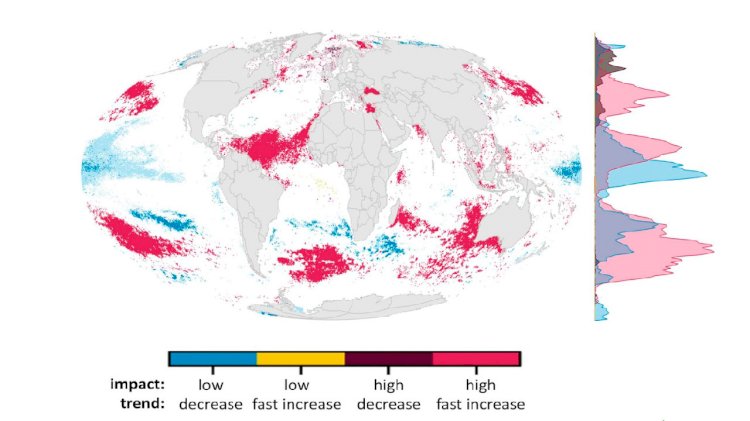 To assess the pace of change, the authors leveraged two previous and similar assessments conducted by several of the same team members and others in 2008 and 2013, which provided first glimpses into the full, cumulative extent of humanity’s impacts on oceans.

“Previously, we had a good measure of the magnitude of human impacts, but not a clear picture of how they are changing.”

Frazier was surprised to see in the data how dramatically ocean temperatures have increased in a relatively short period of time.

“You don't need fancy statistics to see how rapidly ocean temperature is changing and understand the magnitude of the problem. I think this study, along with many others, highlights the importance of a concerted global effort to control climate change.”