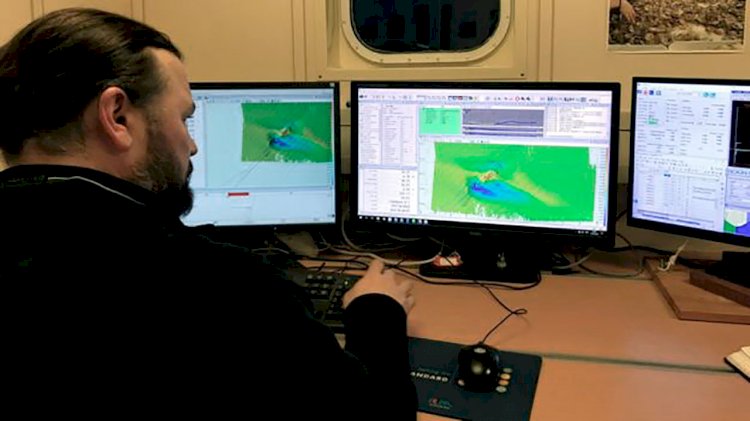 Research by Bangor University was featured in the Drain the Oceans series on National Geographic Channel on Monday, 7 October.

The programme outlines the development of U-Boats, and how they changed the shape of naval warfare. The introduction of the world's first stealth weapon forced Allied forces to adopt new tactics to fight back.

Highlighted in the programme is work carried out by Bangor University’s School of Ocean Science’s research vessel the Prince Madog, which has surveyed numerous shipwreck sites in the Irish Sea as part of a joint research project with the Royal Commission on Ancient & Historic Monuments in Wales‘s Heritage Lottery funded project: Commemorating the Forgotten U-boat War around the Welsh Coast, 1914-18.

A team of staff from the School of Ocean Sciences led by Dr Mike Roberts have been using a multibeam sonar system and the latest imaging techniques to reveal underwater wrecks from the Great War.

The sonar system on the Prince Madog generates very high resolution, three-dimensional models of the seafloor as the research vessel moves through the water over it and these models can allow researchers to identify objects at near centimetre scale. In water depths of 100 metres, typically found in the Irish Sea, the team are generating models and images of wrecks that can help marine archaeologists confirm their identity and even provide evidence of their demise.

Dr Mike Roberts explains why the information is so valuable:

“While these wartime relics can provide valuable information to historians and archaeologists, they may also help lead to the birth of a new industry. The data we’re collecting is providing unique insights into how these wrecks influence physical and biological processes in the marine environment. This information is being used to support the ambitions of the marine renewable energy sector.

These images of wrecks reveal how the tide and currents have removed or deposited sediments and how the presence of these structures on the seabed have influenced these processes over time and what might happen when artificial structures are placed in the same or similar areas of seabed.”

“Drain the Oceans is proud to have collaborated with the crew of the Prince Madog and the team for the Bangor University led by Dr Michael Roberts. Add the historical and archaeological expertise of Dr Innes McCartney from Bournemouth University and we had the ingredients for a fascinating story for our film on U boat development during the 1st WW, which to all intents and purposes was their golden age.

The work done by the team reveals just how successful and dangerous they were in the Irish Sea although as we see it was not all one sided. Drain the Oceans prides itself on taking the accurate data obtained in this fashion and turning it into photo realistic imagery of the sea bed and those wrecks found on it allowing these important aspects of our history to told to the widest audience possible. We are also proud that the series rates highly in over 170 countries across the world being translated into 44 languages and we feel that ‘Killer U-boats’ will be no exception’.