The journey of around 5,000 nautical miles took just over 30 days. 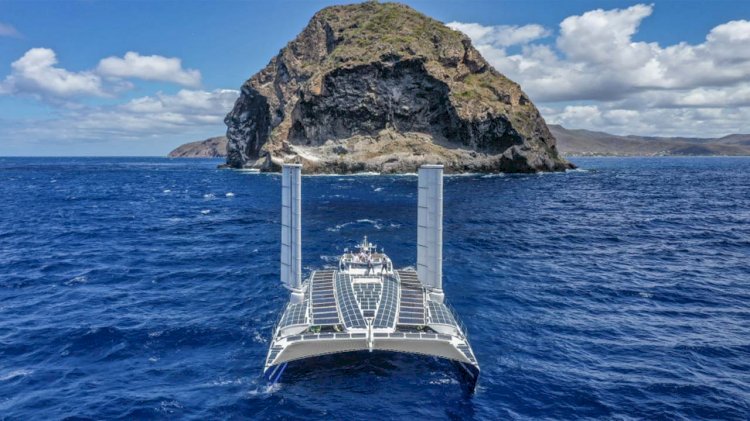 Setting sail from Saint-Malo, the journey of around 5,000 nautical miles took just over 30 days, during which time it was totally self-sufficient in terms of energy, with no CO2 or fine particle emissions.

“The boat has just covered over 9,000km entirely self-sufficiently, with no possibility of any technical pit-stops due to the general lockdown. Crossing the Atlantic with this floating laboratory sends a powerful message to the decision-makers as it demonstrates the supreme reliability and resilience of our low-carbon systems. We can and must switch energy model. Massive investment for economic recovery is needed to enable us to build a whole new world, which no longer involves fossil fuels.”

Aboard the boat for over a month, the crew set sail prior to the lockdown measures and subsequently learned that it was unable to relieve some of its members in the Canaries as planned, any transfers being blocked for health reasons. As such, it adhered to all the necessary guidelines to guarantee its safety and thankfully the ocean remains a sterile environment so the crew members can be repatriated to metropolitan France promptly and get back to their next of kin and a less marine confinement. A new crew will come and take over as soon as possible to ensure the on-board systems are maintained and prepare for the upcoming sea passages. 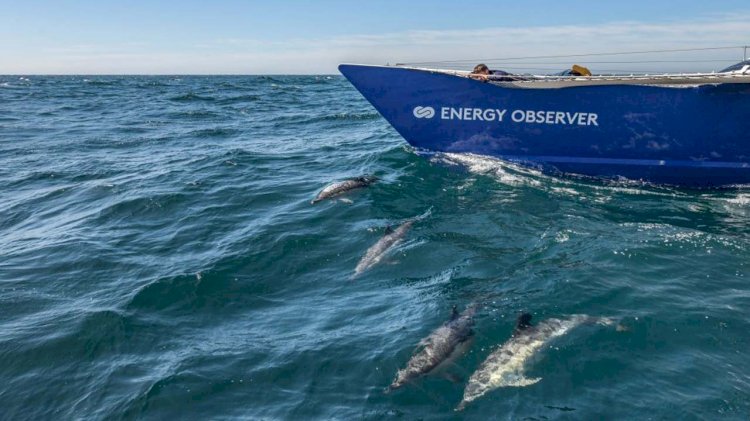 In confinement at sea, the crew was unable to set foot on land during its stopovers in the Canary Islands or Cape Verde, instead receiving fresh produce from a distance in the Canaries. In this way, as the whole world is having to endure an unprecedented period of lockdown, the crew confined at sea was lucky enough to enjoy a safe passage in complete harmony with nature, crossing paths with numerous marine species – dolphins, whales, turtles and Manta rays offshore of Cape Verde, as well as salpae – whilst producing their own energy and drinking water using only the wind, sun and hydrogen.

The on board technologies on this floating laboratory have certainly proven their worth in terms of performance and reliability. Indeed, it posted an average speed of over 6 knots, despite adverse weather at the start of the course and then the boat demonstrated improved potential with the more favourable conditions from Cape Verde. A combination of 202m² of latest generation solar panels, two automatic propulsion wings and new variable pitch propellers enable the boat to perform very well on this type of transoceanic course. The hydrogen system allowed irregularities in the amount of sunshine or wind to be compensated for, providing regular performance whatever the conditions, without the need to drag around any excess weight. 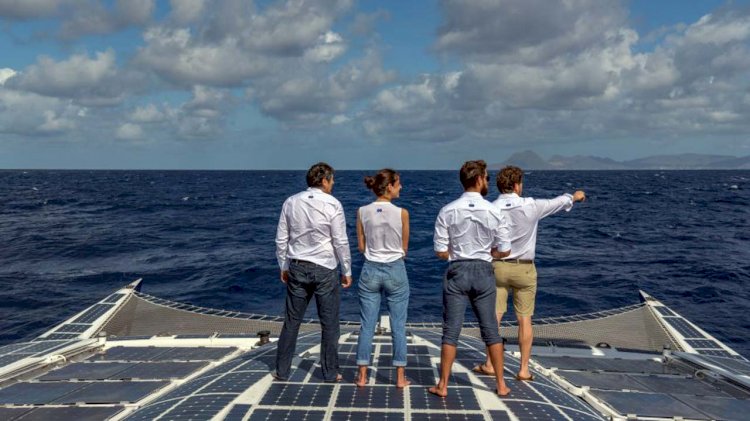 Marin Jarry, Director of Armament and Second in Command:

“A 34-day passage at an average speed close to 6 knots is a real achievement for our catamaran of the future, which has racked up around 5,000 nautical miles whilst being completely self-sufficient in terms of energy – a new record for her! Without the hydrogen and the daily use of fuel cells, this passage would have been a lot longer. We’ve had no technical failures, despite what were extreme conditions at times.

Energy Observer has certainly proven how reliable her energetic architecture is. I’d like to give a shout out to the crew and I congratulate them as there wasn’t a moment’s hesitation when the question was raised about whether to continue the Odyssey offshore of Cape Finisterre. Despite being away from their next of kin during this tough period, they’ve managed to retain their professionalism and their good humour. It’s mission accomplished and accomplished well!”

Within the current climate, Energy Observer, a technological laboratory as well as an ideas laboratory, is continuing its role as the First French ambassador for sustainable development goals. This vessel, which foreshadows tomorrow’s energy systems, carries with it a message of hope. That of a world fuelled by renewable energies using green hydrogen, that of a new energy model that is a world apart from overproduction and anthropocentric models, for the benefit of truly inclusive models that support the living world.

Subsea 7 has announced the award of a contract by Vattenfall for the Hollandse Kust...