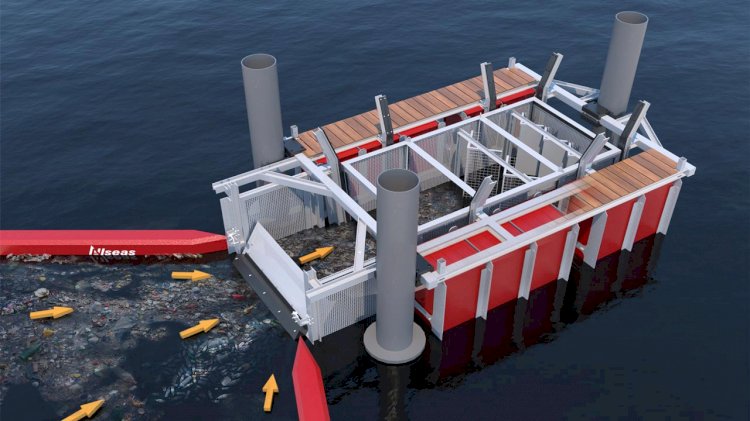 Allseas has designed the system to catch both large waste floating on the surface and smaller debris – mainly plastics – suspended in the water column. Later this month, Allseas will be installing Catchy  close to a nature reserve in the Vijfsluizer harbour, between the cities Schiedam and Vlaardingen.

Waste, primarily plastic, has become a serious problem for the environment, especially our seas and oceans. Rijkswaterstaat, the Dutch authority for public works and water management, is looking into ways to collect the waste in rivers before it can spread to the sea. For the Nieuwe Maas River in the Netherlands, Rijkswaterstaat commissioned Allseas to develop a waste collection system for the Vijfsluizer harbour, located between the cities Schiedam and Vlaardingen.

The predominant southwest wind drives waste into the Vijfsluizer harbour making it a “hotspot” for (plastic) waste and litter. North of the harbour lies a preserved natural area that is home to wildlife such as seals, marine birds and fish. Allseas is developing a system to catch waste and prevent it from reaching this protected area and the neighbouring North Sea.

The system, named “Catchy”,  comprises three elements: two floating booms, a floating frame and collection cage. The floating booms, 200 m and 10 m in length, guide waste under the effect of the wind and currents towards the collection cage. Both booms are equipped with an underwater skirt to catch both surface and submerged waste. The floating frame is secured to piles that allow it to move vertically with the tides. Waste captured in the cage is emptied regularly into a container, which is transported by truck to a site for processing.

Allseas’ waste collection system is simple, robust and works entirely on wind and currents to catch waste. The system collects larger (plastic) waste floating on the surface as well as smaller debris in the upper part of the water column.

The system is to become operational in August 2020 and will remain in the Vijfsluizer harbour for one year. In addition to the development and installation of the system, Allseas will analyse the collected waste to provide Rijkswaterstaat with information on the types and amounts of plastics and recommendations for sustainable and cost-effective post-processing possibilities.