The test will be carried out in collaboration with ESL Shipping and Gasum. This is the first time that biogas will be used as fuel for ships in Finland. 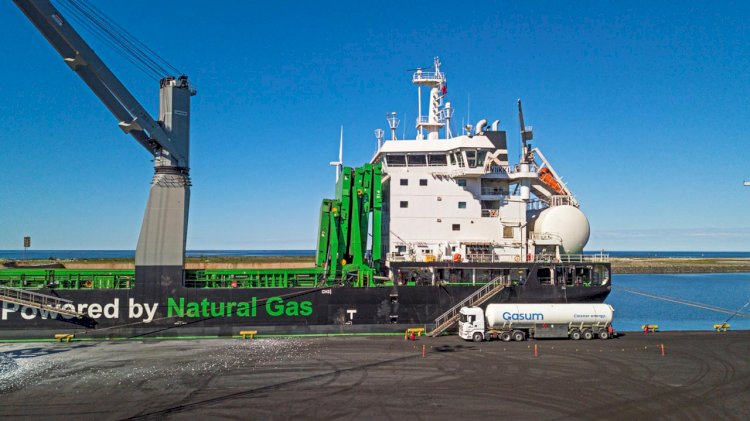 SSAB, ESL Shipping and Gasum are working together to reduce the emissions arising in shipping SSAB's raw materials.

Last year, SSAB and ESL Shipping introduced a new transport chain that, in comparison with its predecessor, nearly halved the carbon dioxide emissions originating in shipping SSAB's raw materials between Luleå, Oxelösund and Raahe. The improved transport chain brought into use ESL Shipping's new ships Viikki and Haaga which are fueled by liquefied natural gas (LNG) rather than conventional fuels. Now these companies are piloting the use of liquefied biogas (LBG) as a supplementary fuel to further replace fossil fuels.

In the test that kicked off today, M/S Viikki was fueled with LNG and one tanker load of liquefied biogas which was brought to SSAB Raahe from the Gasum Terminal in Pori.

"With this test, we aim to find out whether biogas could be used in small amounts for maritime transport to reduce emissions. The methane in biogas originates from biogenic material and so does not contain any fossil coal.  This means the amount of biogas used in the test could further reduce the fossil  carbon dioxide emissions originating in this transport chain by between 25% and 28%."

Efforts toward removing fossil CO2 emissions from the transport chain would require replacing all LNG with LBG and replacing  the diesel fuel used to power  the ship’s engine with fossil-free biodiesel.

"Our company's key environmental goal for 2020 is testing biogas in our ships. We have been engaged in long-term environmental work together with SSAB for years, and now we are taking a new significant step towards fossil-free sea transport."

SSAB wants to launch fossil-free steel on the market as the world's first steel company as early as 2026. The entire company is aiming to be fossil free by 2045. To achieve these targets, SSAB together with LKAB and Vattenfall has launched the HYBRIT initiative to eliminate fossil carbon dioxide emissions across the entire steel manufacturing value chain from mines to finished steel products.

"However, for operations to be entirely fossil free, it is also necessary to strive to eliminate fossil fuels from shipping."

More than 90% of carbon dioxide emissions at SSAB Raahe originate in ironmaking, where coal is used as a raw material in the reduction process. The HYBRIT initiative aims to replace coal with hydrogen, which means emissions will be water vapor instead of carbon dioxide. Iron is made at SSAB Raahe using two blast furnaces, one of which will be decommissioned in about 2029, when half of the production will switch to electric arc furnace technology where hydrogen-reduced iron and recycled steel will be used as raw materials. This transition will cut the plant's emissions by about 40%. The other blast furnace will also be replaced by an electric arc furnace by 2040, which will reduce the plant's fossil carbon dioxide emissions to zero if shipping can be operated without fossil fuels.