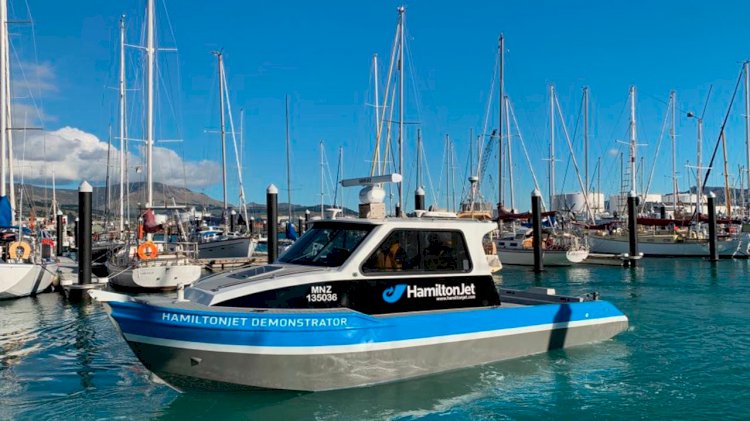 Boston-based Sea Machines Robotics announced today that it has successfully commissioned an SM300 autonomous control system aboard a HamiltonJet-powered workboat in New Zealand. HamiltonJet is now trialing this marine technology and has offered to provide on-demand customer demonstrations in the Southern Hemisphere.

The combination of Sea Machines and HamiltonJet systems for commercial vessels gives owners greater operational capability by enabling autonomous control of commercial vessels executing nearshore or coastal missions. The integration of water-jets delivers increased maneuverability, precise station-keeping and even emergency stops. The internal nature of a water jet drive also increases confidence when running autonomously and allows shallower-water operation. As well as offering full autonomy, the Sea Machines system can also act as an on-board skipper aid for precise waypoint following or as a remote-helm control system for on- or off-board use.

Ahead of the install, the companies’ respective development teams worked from opposite sides of the Earth to ensure the Sea Machines system could digitally communicate with the proven HamiltonJetlink interface for autonomous systems. The installation and integration of the SM300 was completed in Christchurch without direct oversight by Sea Machines, a success made possible by the system’s intentional plug-and-perform interfaces.

Sea Machines designed the SM300 to integrate with the digital and analog marine systems, sensors and instruments commonly found on workboats and commercial vessels. Once installed, the intelligent SM300 adds the following operational capabilities:

“Sea Machines is pleased to team with HamiltonJet, the unquestioned leader in water-jet propulsion systems for workboats and utility craft. In addition to providing valuable feedback for system advancements, HamiltonJet has an established global network and install base, potentially helping Sea Machines access new workboat, utility and high-end yacht markets around the world. As an early adopter of Sea Machines technologies, HamiltonJet again reaffirms its reputation as an innovator and advanced solutions provider for commercial marine operators.”

“At HamiltonJet, we worked on our first remote-control application in 1993 and have since integrated with multiple autonomy providers in the military space. Sea Machines seem to have a well-packaged offering for the commercial market and I admire the strategy Sea Machines is taking, which is to turn autonomy into a product you can actually buy and get working with minimum fuss and modification. This is particularly true with HamiltonJet water-jets, where our simplified JETlink interface makes integration and control easy. We are impressed with the demonstration and happy to show anyone the vessel located in Christchurch New Zealand.”

Sea Machines’ SM Series of products, which includes the SM200 and SM300, provides marine operators a new era of task-driven, computer-guided vessel control, bringing advanced autonomy within reach for small- and large-scale operations. Sea Machines is also a leading developer of advanced perception and navigation assistance technology for a range of vessel types, including container ships. The company is currently testing its perception and situational awareness technology aboard one of A.P. Moller-Maersk’s newest ice-class container ships and has several other installations scheduled.