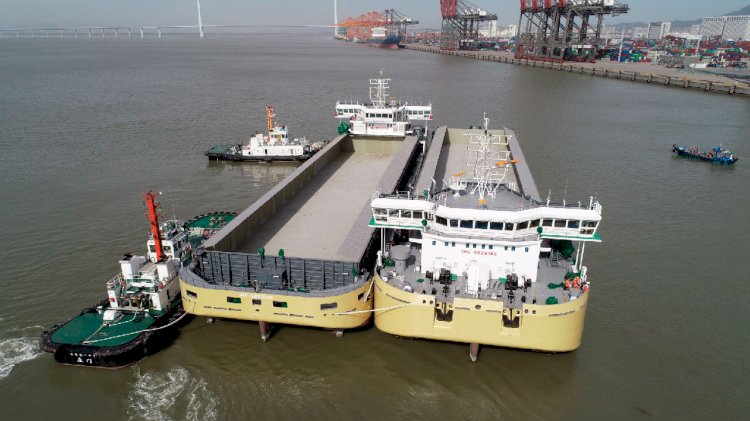 The FAZELs and FCTUs are built to European standards and operated in the UAE by Louis Dreyfus Ports & Logistics, a subsidiary of the French company Louis Dreyfus Armateurs. The German propulsion expert SCHOTTEL equipped the vessels with a total of 20 rudderpropellers.

“For the Hassyan project in Dubai, we opted for SCHOTTEL as they have decades of crucial expertise in the field of azimuth thrusters and will support us with a competent service team,” states Mathieu Muzeau, General Manager of Louis Dreyfus Ports & Logistics. “Particularly in this project, the reliability of the propulsion systems is of essential importance. SCHOTTEL with its worldwide on-site service and spare parts stocks enables downtimes to be kept as short as possible.”

Each of the shallow draft barges is equipped with four azimuth thrusters (two at the stern and two at the bow). The main propulsion of one self-propelled barge comprises four vertically installed 780 kW electric motors, each driving a SCHOTTEL Rudderpropeller type SRP 260 L FP with a propeller diameter of 1.6 m. Additionally, each FAZEL barge is equipped with a SCHOTTEL Masterstick control system. This enables the captain to control all four thrusters with one single lever and to manoeuver more precisely. The 102.9 m long and 24.6 m wide FAZELs are almost equivalent to a DP system. Thus, the berthing manoeuver and approach speed is controlled in such a manner that no tug assistance is required. Each of the FCTUs is driven by two electric motors acting on a SCHOTTEL Rudderpropeller which is structurally identical to those of the FAZELs. The 48 t SWL floating crane has an overall length of 64.2 m and 24.0 m in width by a lifting height of 35.0 m.

FCTUs and FAZELs will be used to unload capesize vessels and deliver coal at daily rate exceeding 36,000 metric tonnes. The coal-fired power plant is expected to produce sufficient electricity for nearly 250,000 households in Dubai. It is located on a four-square-kilometre site 60 kilometres south-west of Dubai and will be the first coal-based power plant in the region.
The fleet has already been delivered to Dubai and is scheduled to enter operation in 2019.