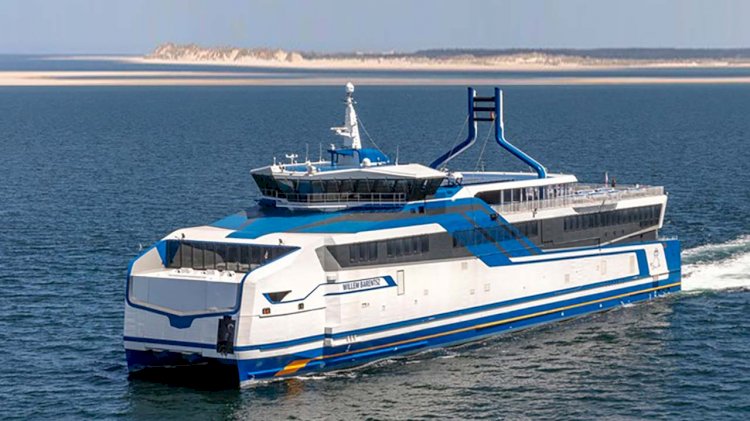 BMT are pleased to announce the successful completion of sea trials for its latest design, the first of two 70m 100% LNG-fuelled ROPAX ferry designed for the operator Rederij Doeksen in the Netherlands. The two sistership ‘Willem Barentsz’ and ‘Willem de Vlamingh’ were built by Strategic Marine Shipyard (Vietnam) while final outfit and commissioning were completed by Rederij Doeksen.

With an operating area within an UNESCO World Heritage Site (The ‘Wadden Sea’), the main focus for Rederij Doeksen led by its managing director Paul Melles was on reducing the environmental impact of the vessel operation. BMT supported this ambition and provided the technical solution to reduce NOx, CO2, and noise while increasing the efficiency of the design to achieve lower operational costs.

In order to support the increased traffic on the route between Harlingen and Terschelling, different newbuild options were considered. The medium speed aluminium catamaran platform was selected to achieve significant fuel consumption reduction compared to an equivalent monohull.

Having considered these requirements together with the specificity of the route BMT developed the ship full detail design, Sylvain Julien, Director of Naval Architecture at  Specialised Ship Design, BMT, commented:

“The development of full aluminium vessel to meet national rules that typically assumes steel construction has, as always, been a challenge. Despite this, the end result demonstrates the benefits in terms of low power consumption, and specifically for Rederij Doeksen’s operation, the low operating draft”.

The development of the hull form followed a multi design criteria optimisation approach to account for the many constraints on the projects such as integration of the LNG containment systems and shallow water operation while offering lowest possible power requirement across the ferry operational range. The outcome of this work was successfully confirmed through a series of shallow and deep water model testing.

The low power requirement confirmed through this work also bolstered Rederij Doeksen’s  decision to use LNG as sole fuel onboard the vessel. Mr Melles confirmed the technology review part of the newbuild project clearly pointed towards LNG being the “most practical, reliable and clean energy source” for the route.

The propulsion system selected is based on the new MTU pure gas engines providing both fuel efficiency and sustainability with no marine gas oils being required for operation (unlike the more common dual gas engines). The IMO Tier III and EU stage V compliant engines each deliver 1,500 kW and drive the VETH VZ contra-rotative unit to achieve a service speed of 14 knots.

The vessel design integrates other features to enhance its green credentials and further reduce its emissions and operational costs. Aside for the LNG used for main propulsion and boilers, BMT and Rederij Doeksen paid particular attention to minimising energy consumption and reduce generator set sizing. Energy saving features include in particular a waste heat recovery and battery system to power the vessel bow thrusters and provide peak shaving capabilities.

ABS to class another four VLECs for Zhejiang Satellite...