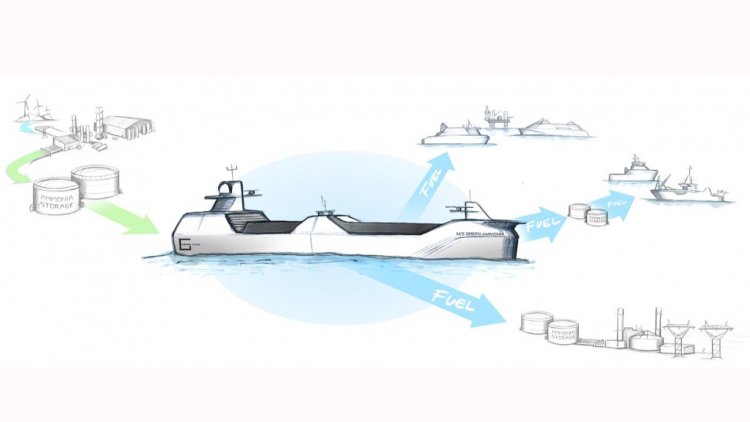 The Norwegian funding scheme Pilot-E confirmed they will support the MS Green Ammonia project with 46,3 million NOK. Grieg Edge and Wärtsilä Norway are jointly running the project to launch the GHG emission-free tanker in 2024.

Grieg Star Group established Grieg Edge as its innovation hub one year ago. The MS Green Ammonia project is it’s first big venture. The project is a result of a Nordic industrial collaboration group initiated by Zeeds (Zero Emission Energy Distribution at Sea).

“We regard the funding from Pilot-E as a valuable stamp of approval for our plans. Both Wärtsilä and we feel confident that this project represents the future for the maritime sector. To have the support from the Norwegian Research Council and Innovation Norway is a significant step towards completion.”

Minister of Trade and Industry Iselin Nybø in a press release by Pilot-E, says:

“This year’s grants show that the Norwegian maritime industry is really at the forefront of developing emission-free solutions with great export potential. This is another great example of how we create new green industry and growth in Norway.”

The partners plan to have MS Green Ammonia distribute green ammonia from the planned factory in Berlevåg to various locations and end-users along the coast. Concrete design, size, and volume are all elements that are dependant on the market and end-users. However, the project has already established LOIs with several heavyweight industrial partners.

“We see a strong interest from owners of ferries, offshore supply ships, fishing vessels, and from energy-producing companies. In total, they require an amount of energy surpassing what we can achieve in this project. The market is there without a doubt.”

One prominent group of potential customers are owners of ships using LNG as a fuel today. Depending on the engine’s build, they may mix ammonia in their LNG fuel – or easily retrofit to use only ammonia.

“Norway, with its high number of vessels using LNG or alternative fuels, with high volumes of green energy, and the cheapest electrical power in Europe, is probably the perfect arena for the world’s first market for green ammonia.”

“We are in the midst of a transition to low carbon shipping, and the long traditions we have in Norway for cross-industry corporation is vital for a successful implementation of a new green value chain. Trough fruitful collaboration Wärtsilä has earlier been part of the implementation of LNG and hybrid systems, and fuel cells, and are excited to contribute to this important demonstration project of green ammonia together with a forward-leaning ship owner as Grieg Edge and the other collaborating partners.”