Aker Arctic’s naval architects have explored four alternative energy sources to research what advantages and challenges are involved in the adoption of emerging climate-neutral solutions for icebreaking vessels. 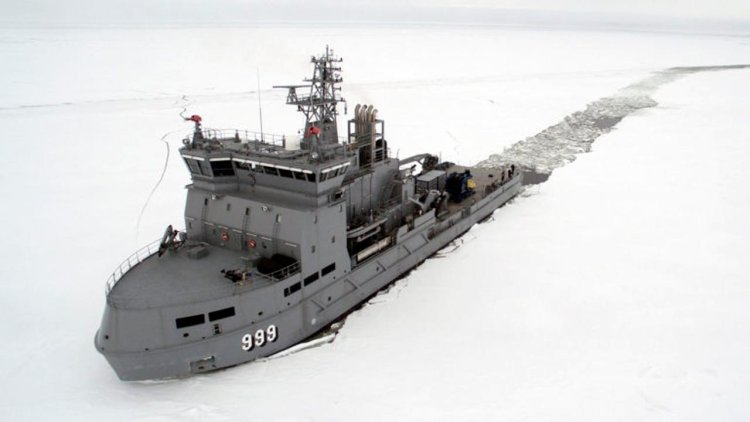 The long-term overall aim in shipping is to become completely carbon-free. Initially, it means moving away from purely fossil fuels – heavy fuel oil, marine diesel oil and liquefied natural gas (LNG) – to alternative carbon-neutral fuels such as biogas and bio-methanol. In the long run, the goal is to transition fully to carbon-free fuels, such as ammonia and hydrogen, produced with renewable energy.

By 2030, carbon dioxide emissions per transport work (ton-miles of cargo) should be reduced by 40% from 2008 levels, and, by 2050, the International Maritime Organisation (IMO) has set the ambitious target of a minimum reduction of 50% for total annual greenhouse gas emissions from 2008 levels.

However, with the technology already available today and the technology currently under development, it is already possible to design carbon-neutral and even zero-carbon icebreakers. To illustrate what they could look like and how they would perform, Aker Arctic’s naval architects have made a study of a smaller icebreaker for Baltic Sea conditions based on four alternative energy sources: hydrogen, ammonia, batteries, and methanol.

The sketch concepts are evaluated against a baseline design, fuelled by renewable diesel such as hydrotreated vegetable oil.

All concepts share the same general design, main dimensions, and icebreaking capability. With a length of 86.6 m, beam of 22.4 m and draught of 7.5 m (7.0 m with hydrogen), the icebreakers are only slightly bigger than Voima, the oldest and smallest member of the Finnish icebreaker fleet.

The 12-megawatt twin-azimuth propulsion system gives the icebreakers superior manoeuvrability, improving safety and efficiency when operating near other ships. With a modern double acting icebreaker hull form, they can achieve a speed in excess of 8 knots in 80-centimetre level ice, an icebreaking capability similar to the renowned Otso class.

The ice class of the vessels, Polar Class 4 Icebreaker(+), is the same as that of the newest Finnish icebreaker Polaris and considered sufficient for all escort icebreaking operations in the Baltic Sea, including the most severe ice conditions in the Bothnian Bay.

When developing the alternative fuel concepts, some forward-looking assumptions have been made. For example, it has been assumed that the alternative fuel can be burned in internal combustion engines without mixing it with another fuel such as diesel oil or natural gas. This is in line with the stated development goal of the world’s leading engine manufacturers.

Renewable diesel oil, which can be stored in normal structural hull tanks and has a higher energy density compared to the fuel alternatives, provides the baseline concept with the longest autonomy time: 22.4 days at full icebreaking power.

As hydrotreated vegetable oil can be readily used as fuel in any marine diesel engine, the power plant technology is already available on the market. However, in order to meet IMO Tier III emission limits for nitrogen oxides (NOx), selective catalytic reduction with urea solution is required. 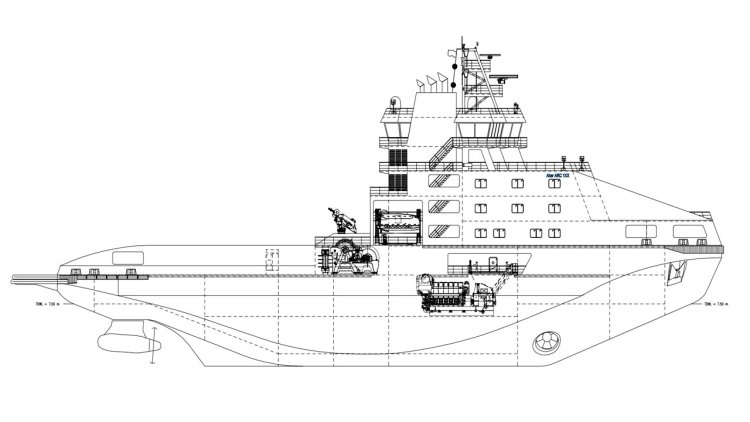 The hydrogen-fuelled icebreaker concept has four cylindrical vacuum-insulated IMO Type C tanks for storing cryogenic liquefied hydrogen with a total net volume of about 1400 m³. Due to the low density of liquefied hydrogen, the fuel capacity is restricted by volume rather than weight and, consequently, the draught of the icebreaker has been reduced by 0.5 m compared to the other concept alternatives.

The achievable autonomy time is 4.6 days at full icebreaking power or 21% of the baseline concept.

In addition to hydrogen-burning internal combustion engines, hydrogen can also be used in fuel cells; both technologies are still in development. Hydrogen-burning gas engines may be able to meet IMO Tier III limits for NOx emissions without exhaust gas after treatment. 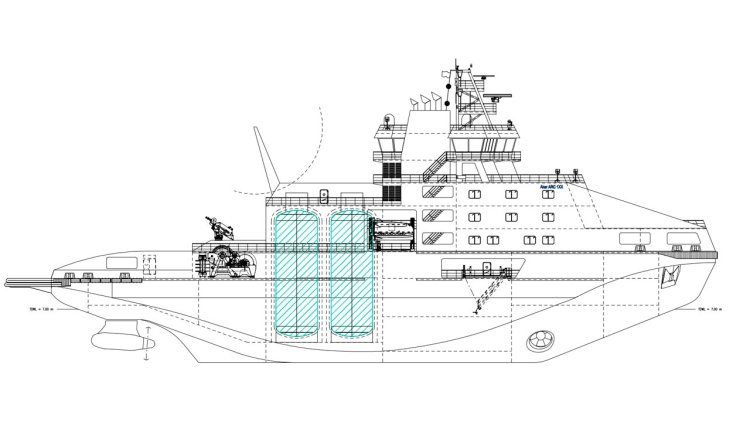 The ammonia-fuelled variant requires a special tank – in this case an IMO Type A prismatic tank – for storing refrigerated liquid ammonia. The significantly lower net calorific value of ammonia and the added weight of the storage tank limit the achievable autonomy time to 7.3 days at full icebreaking power or 33% of the baseline concept.

Ammonia-burning internal combustion engines are currently in development and the technology is expected to become available in a few years. In order to meet IMO Tier III requirements for NOx emissions, ammonia-fuelled ships will require emission abatement with selective catalytic reduction. 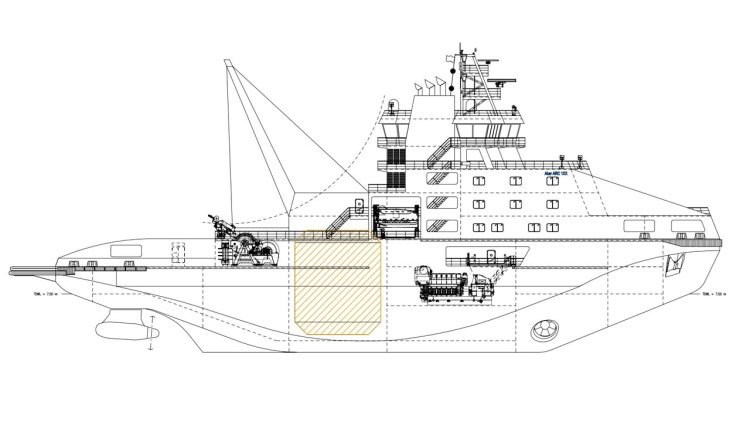 In the fully electric battery-powered variant, the conventional power plant and its auxiliary systems have been replaced entirely with a large energy storage system consisting of battery packs. As the battery-powered icebreaker produces no emissions of any kind, even the funnel has become obsolete.

With the energy density of present-day battery technology, achievable autonomy time is limited to less than 6 hours at full icebreaking power or about 1% of the baseline concept, even if energy required for heating is not considered. 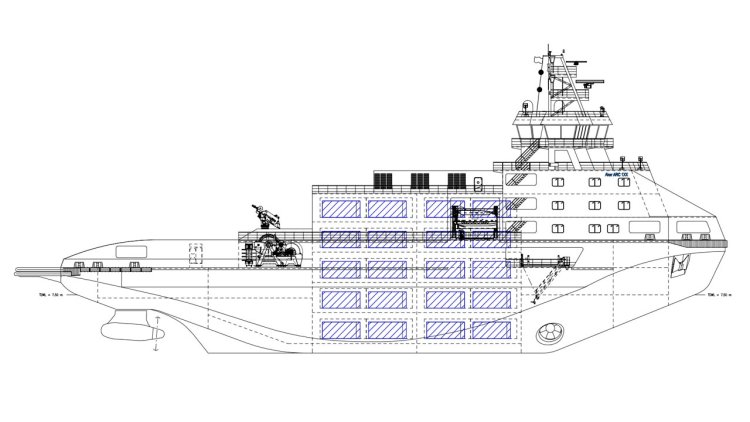 With a fully electric battery-powered icebreaker, the autonomy time is about 1% of the baseline concept.

In the methanol-fuelled variant, fuel is stored in a structural steel tank separated from other compartments with a cofferdam. The achievable autonomy time is 9 days at full icebreaking power or 40% of the baseline concept. Similar to ammonia, the fuel capacity is limited by the displacement of the icebreaker and the lower achieved autonomy time is a consequence of lower net calorific value of methanol.

Methanol-burning internal combustion engines are already available on the market. These engines may be able to meet IMO Tier III limits without selective catalytic reduction. 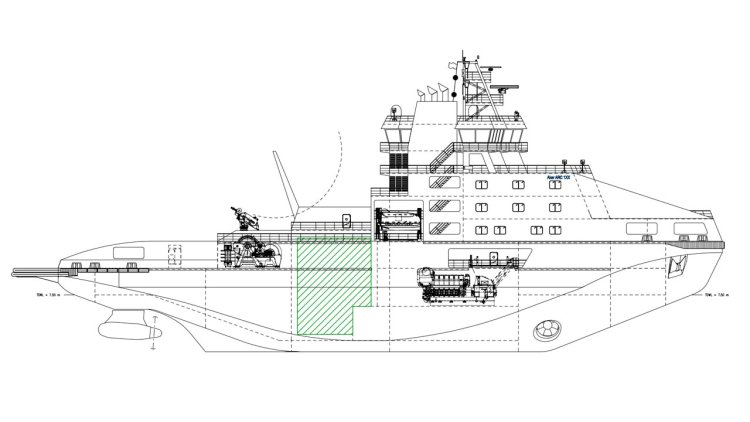 In the methanol-fuelled variant, fuel is stored in a structural steel tank separated from other compartments with a cofferdam.

As focus turns increasingly to a green transition, intense research and development efforts are bringing new engines suitable for new fuels to the market and better ways to produce and distribute energy are invented. Decisions to invest in new distribution infrastructures are also underway.

“The timeframe from a ship’s design to final product is at least 2-3 years, which means that bunkering infrastructure in the intended area can also be built during that time.

“However, choosing a zero-carbon fuel may not be worth the effort if the alternative fuel is produced using fossil energy or if it has to be transported over long distances with conventional tankers.”

Another aspect that needs to be considered carefully is the reduced operating range and autonomy time of icebreakers using alternative fuels with lower energy density.

“The impact of more frequent bunkering stops or refuelling voyages on vessel availability and overall energy consumption need to be evaluated in both fleet-level operations planning and when drafting the performance requirements of future icebreakers.”

“Perhaps in the future, icebreakers will come into port once per week instead of once every two weeks.”