Building an ecological baseline in the Central Pacific with USV 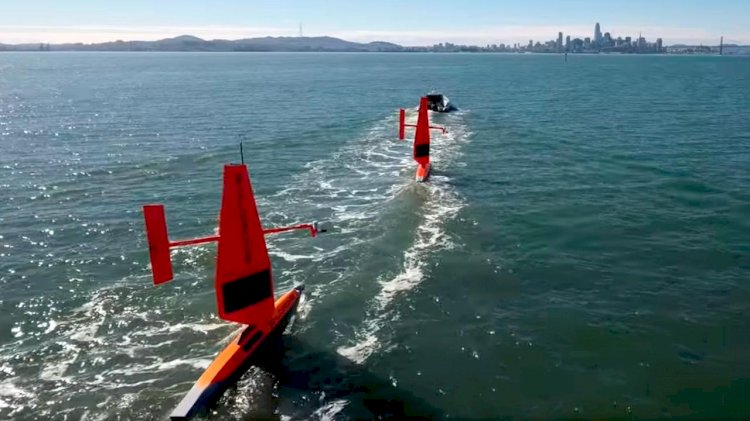 A Saildrone unmanned surface vehicle (USV) deployed from Honolulu, is studying the behavior of small midwater fishes, squids, and crustaceans, collectively called micronekton, in the Clarion-Clipperton Fracture Zone (CCZ) southeast of Hawai’i in order to establish an ecological baseline ahead of proposed deep seabed mining in the region. The 30-day mission is supported by a Saildrone Award.

The CCZ is a six million square kilometer area in the Central Pacific Ocean rich in polymetallic nodules—metal-rich deposits that have precipitated out of the water column over millions of years and settled on the seafloor. The metals of specific interest are cobalt, nickel, and copper, which are needed for electronics manufacturing and renewable energy (electric car batteries). Industrial-scale deep-sea mining in the CCZ, one of the largest reserves of polymetallic nodules on Earth, could begin as early as 2022.

Micronekton are often referred to as a prey community because these small animals provide food for top predators and commercially important species like tuna, billfishes, and marine mammals. They reside deep in the water column where light is limited, but every evening, billions of these tiny organisms migrate to the sea surface in search of food. This mass movement is called the diel (daily) vertical migration, and it’s the largest migration on the planet, in terms of biomass. The Hawai’i CCZ mission will address the question of variability in the vertical dynamic of midwater prey communities and how those dynamics are driven by the natural oceanography of the area.

Jessica Perelman, a Ph.D. candidate in the Department of Oceanography at the University of Hawai’i, said:

“Our goal is to characterize the ecosystems that might be influenced by the mining process, including these midwater species that migrate daily to the surface to feed, driving a lot of vertical connectivity and carbon transport in the water column.” 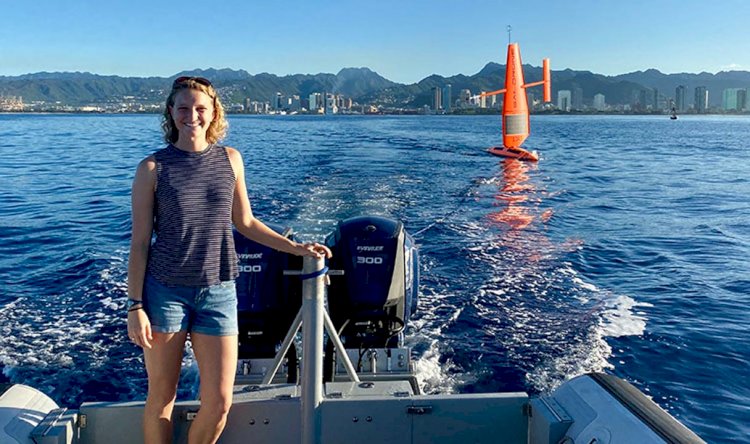 Environmental drivers like light and oxygen are thought to cause micronekton and zooplankton to vertically migrate. These animals are trying to escape visual predation, but they also have certain physiological constraints; if there’s limited oxygen at a certain depth of the water column it could restrict their migration. Increased sediment in the water column from mining could affect the availability of light and oxygen.

“We want to be able to understand the correlation between those variables and the behaviors of these prey communities as they occur naturally so that we have a baseline to asses and monitor future changes in the CCZ prior to any environmental disturbances that might occur from impending human activities.”

Saildrone USVs are equipped with a suite of science-grade sensors to record meteorological and oceanographic data above and below the sea surface, including oxygen, salinity, and the conductivity, temperature, and pressure of seawater, as well as wind speed and direction, air temperature, relative humidity, and wave height and period. Hourly and minutely data is sent in real-time via satellite to Saildrone Mission Control; high-resolution (one second or better) data is available once the saildrone is retrieved.

For the Hawai’i CCZ mission, SD 1043 is also equipped with a Simrad WBT Mini (EK80) echo sounder. The echo sounder sends a pulse of sound through the water; the returning sound pulse echoing off the back of organisms in the water column called acoustic backscatter can be measured. Saildrones are wind and solar-powered vehicles, which makes them virtually silent. With no engine or moving mechanical parts, they are therefore capable of collecting echo sounder data much deeper in the water column than motor-powered vessels.

“Deep-sea mining could have significant consequences on a massive ecosystem in the Central Pacific Ocean. It is critical to provide the groups that create regulations and monitor activities the best information possible from sound scientific research.”