A little over a year has passed since construction began 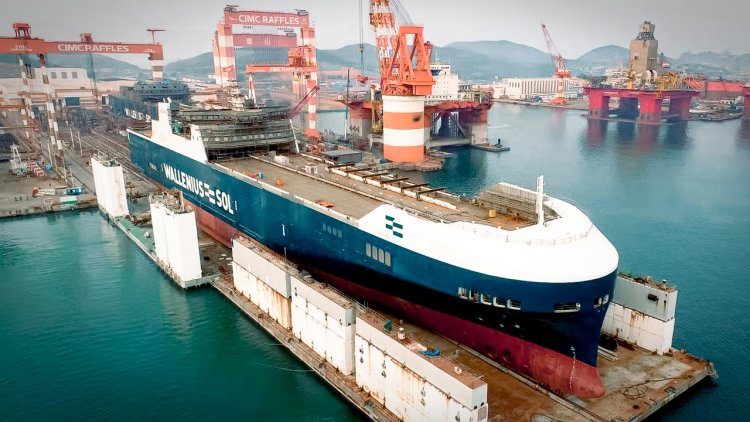 On 9th July 2021, the world’s largest ice-rated multi-fuel RoRo vessel was launched at the CIMC Raffles shipyard in Yantai, China.

The construction of WALLENIUS SOL’s new RoRo vessel reached a milestone when the record-breaking ship was launched on Friday 9th July amid much ceremony. A little over a year has passed since construction began, and company CEO Ragnar Johansson followed the launch ceremony from afar due to the pandemic. He says:

‘It’s incredibly exciting to watch a ship growing and see our ideas become reality. These ships will serve us and the growing industries in northern Sweden well for many years to come.’

The ship has a length of 242 metres, a beam of 35.2 metres and is specially designed to meet the harsh winter conditions in the Gulf of Bothnia.

In addition to her conventional RoRo capabilities, the vessel will have a large container capacity. She is expected to be significantly more energy efficient per transported tonne of cargo than other types of ships, while also reducing greenhouse gas emissions by 63%.

Seeing her afloat gives Site Manager Henrik Sundkvist, who has been following her construction closely since March 2020, a special feeling. He says:

‘On the slipway you can see the ship’s entire hull from the bottom up – everything from the bilge keels up to the bridge wings and top mast. Now that she’s in the water, you can only see half the ship, and she takes on a completely different character. It’s an interesting project and there’s a lot of work still to do, but this is a special day at the shipyard, and it gives us pause for reflection. It’s a milestone that gives us new impetus to finish this ship and her sister, which is still on the slipway.’

When a ship of this size is built, there are two common launching methods. One of the most common approaches is to build the ship in an excavated dry dock and then launch it by filling the dry dock with water and allowing the ship to float out.

Sometimes, ships are built in huge dry docks that hold more than one vessel. In this case, the other ships are left behind and the launch vessel is towed out, which is known as semi launching.

However, at CIMC Raffles, where WALLENIUS SOL’s new ships are being built, a slipway is used instead. This is a kind of combination of single blocks and concrete structure, which rests on sand and lies in the fore-and-aft direction of the ship. When it’s time to launch, the ship is winched slowly but surely a little over 300 metres from the build site.

Because WALLENIUS SOL’s new vessels are longer than usual, they require a special solution whereby two barges are joined together to support the full length of the vessel.

Once on the barges, the ship remains in place for a day or two to retouch the paintwork on the underwater part of the hull, before it is finally lowered into the water on the submersible barges.