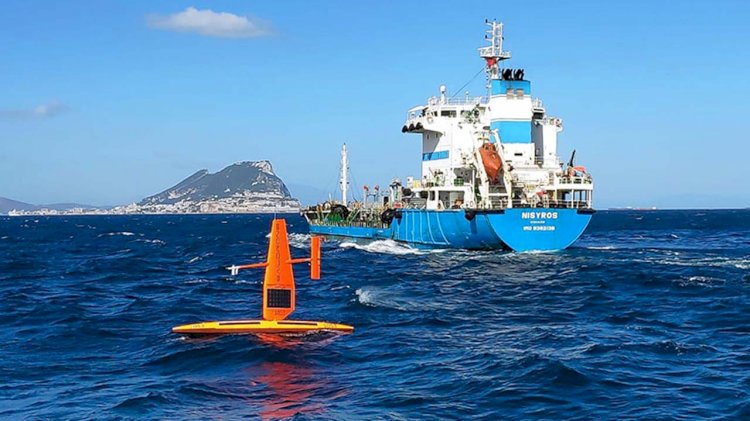 Today, the 31-nautical mile (58-kilometer) passage between Europe and Africa is one of the busiest waterways in the world. The strait is only seven nautical miles (13 kilometers) across at its narrowest and 23.7 nautical miles (44 kilometers) at its widest. Approximately 300 ships cross it every day, about one ship every five minutes. Add to that dozens of fishing boats and recreational vessels. And, on March 6, 2020, at approximately 16:16 UTC, two Saildrone unmanned surface vehicles (USVs) completed the first autonomous passage of the Strait of Gibraltar.

SD 1030 and SD 1053 were escorted by a patrol boat from the Spanish Armada’s Instituto Hidrográfico de la Marina (IHM) and a research vessel from the University of Cadiz throughout the nine-hour passage. The saildrones were deployed from a facility in the Canary Islands operated by the Oceanic Platform of the Canary Islands (PLOCAN) in October on a six-month mission to survey eddies and air-sea carbon fluxes and perform cross-calibrations with European Research Infrastructure (RI) sites in the Atlantic Ocean and Mediterranean Sea. The Strait of Gibraltar passage is a significant milestone on the ATL2MED mission.

The tides and currents through this narrow inlet are incredibly complex. The water in the Atlantic Ocean is less saline and therefore less dense than that of the Mediterranean Sea. Currents through the Strait of Gibraltar are primarily caused by an exchange of water of different salinities; a surface layer of water—to a depth of 125 meters (410 feet) on average—flows into the Mediterranean from the Atlantic at an average speed of two to three knots (3.7 – 5.5 kph). Tidal flows up to four knots (7.4 kph) can either speed up or slow down the eastward surface current. Conditions in the strait are the roughest when the current is at its max speed and a levanter is blowing against it. 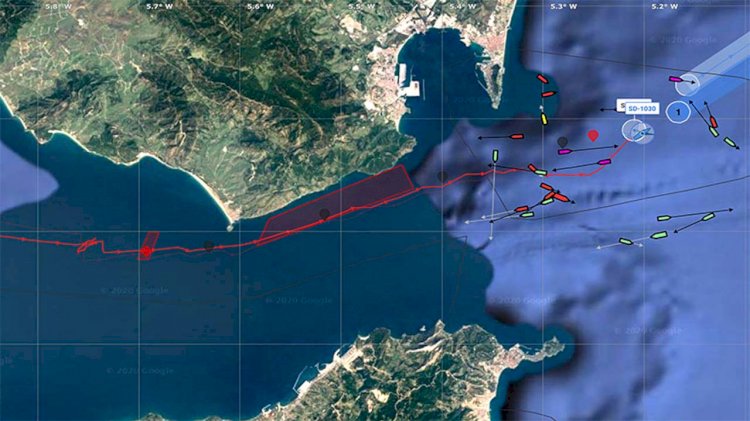 The exchange of water of different salinities and tidal interaction with topography near the Camarinal Sill, the shallowest area of the seafloor between the Iberian Peninsula and Africa, causes a high amplitude internal wave, upwelling of nutrient-rich water and attracting whales, dolphins, and turtles to the region, despite the heavy traffic.

“This is another significant accomplishment for the Saildrone fleet and demonstrates our vehicles are just as comfortable in the ice of the Arctic, the huge storms of the Southern Ocean, or one of the most confined and busy shipping lanes in the world. We are thrilled to have achieved this milestone and to move on to the next stage of the mission, our first sailing in the Mediterranean. I’d like to thank the local authorities, the PLOCAN staff, and the University of Cadiz for their assistance with logistical support and escorting the vehicles through the strait.”

Saildrone was born out of a 10-year research and design project to break the world land speed record and has continued its record-breaking tradition ever since.

Ranger 2 USBL systems have been installed on board OceanPact’s research vessel Seward...

Offshore activities are scheduled to commence in 2020.