Port of Valencia and Baleària invest €100 million in passenger terminal

The new passenger terminal is designed to handle regular passenger and freight traffic with the Balearic Islands and international traffic, as well as cruise ships 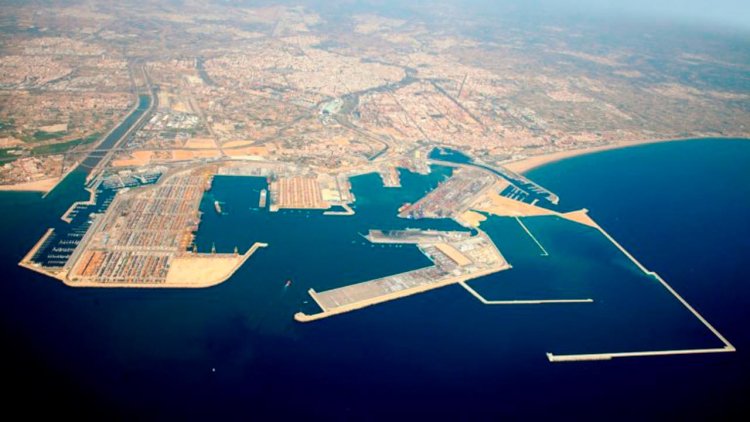 The The Board of Directors of the Port Authority of Valencia (APV) has approved the award to the Valencian company Baleària Eurolineas Marítimas S.A. of the construction and operation of the new public passenger terminal in the Port of Valencia.

This infrastructure will be located between the Muelle de Poniente and the Muelle Perfecto Palacio, in the area previously occupied by the Unión Naval de Valencia shipyard and will cover approximately 100,000 m2. The investment planned by the Valencian shipping company based in Dènia to develop this project will exceed 37 million euros, while the APV will contribute another 61.8 million euros.

In total, nearly 100 million euros for the new public passenger terminal, which will be a model infrastructure in terms of environmental and social sustainability, accessibility and new technologies. This facility will become a benchmark for the Port of Valencia’s surroundings, will generate added value to the seafront and will provide a service to the city and its citizens.

It will be designed to serve regular national and international passenger lines, including those currently operating between Valencia and the Balearic Islands and Algeria, with separate and independent operations and spaces, as well as cruise and ro-ro traffic (platforms or vehicles that access the ships by their own means). For this reason, it will have four berths, one of which will allow ships of up to 360 metres in length to call and another berth of at least 250 metres in length. A 215-metre central jetty will be built for the berthing of ferries.

The operations for regular passenger and cruise traffic will be separate and with different spaces. The objective is to lead the traffic of people and companies between the peninsula and the Balearic Islands, with a commitment by the future Valencian terminal to provide service to 370,000 passengers in the first year for regular line ferries and cruises and up to 472,000 in the fifth years.

For the management of the cruises, Balèaria will incorporate the experience of Global Ports Holding (GPH), which will contribute all its know-how to the project and its commitment to a more sustainable cruise offer with a lower environmental impact. 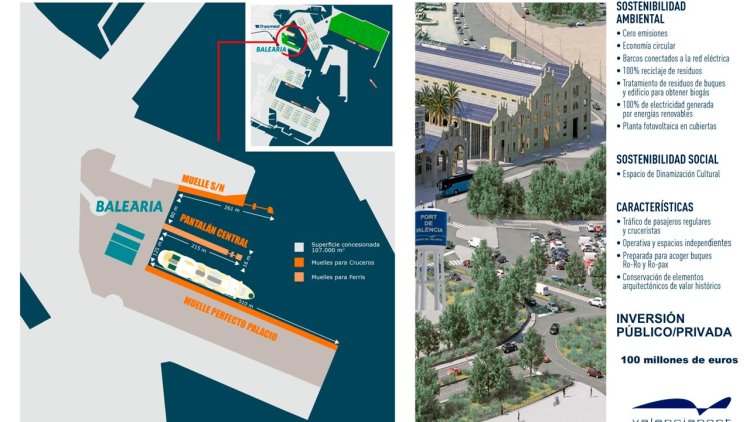 The project submitted to the tender launched by the PAV includes all the contributions of the City Council of Valencia in environmental matters and has the maximum consensus. The maritime station will operate with zero polluting emissions, will be committed to the circular economy and will have a space for cultural dynamisation.

The new passenger terminal of the Port of Valencia guarantees that 100% of the necessary electrical energy will be produced in the facilities themselves and will be of renewable origin: photovoltaic, wind, renewable hydrogen or biofuel. Balearia proposes to have 10 mini-wind turbines to produce 60,000 kWh/year, solar panels on the roofs with an estimated generation of 1,459,062 kWh/year, a water-based electrolysis system, and a fuel cell system to produce electricity from hydrogen with an expected generation of 39,525 kWh/year, among others.

All its docks will be equipped with an electricity supply network for docked ships, making it easier to stop the engines and their emissions when they are visiting València. The terminal will recycle 100% of the waste it generates in a biomethane plant that will be built expressly for this purpose; and it will treat waste from the ships and the building itself to obtain biogas.

All these measures will be complemented with centralised control and management systems for the facilities, intelligent consumption systems, LED lighting, electric charger systems to be installed in car parks and a carbon footprint monitoring system.

The project presented by Balèaria has a budget of more than 37 million euros, to which must be added more than 61 million euros of investment by the PAV earmarked for the refurbishment of the site and rehabilitation of the old shipyard, the adaptation of berths at Espigón del Turia and Muelle Grada and Muelle Fondo, among other works. The PAV is finalising the drafting of the construction projects, so the works are expected to begin in approximately 14 months in the case of the Perfecto Palacio Quay, and 18 months for the Grada Quay.

The PAV has already refurbished part of the site of the old shipyard in the Port of Valencia, where the four elements of the old shipyard listed by the Demetrio Ribes Chair of Industrial Archaeology of the University of Valencia as pieces of historical and artistic value have been maintained. Specifically, these are the water tank, the shipbuilding slipway, two cranes and the most emblematic halls.

In fact, the historic water tank of the former Unión Naval de Levante has already been restored and for some months now it has been bearing the name ‘Port de València’ with the corporate colours of the port administration (blue and white) to give greater visibility to the name of the port, both from land and from the seaside.

A regular Ro-Ro line to Sweden starts operating in the...