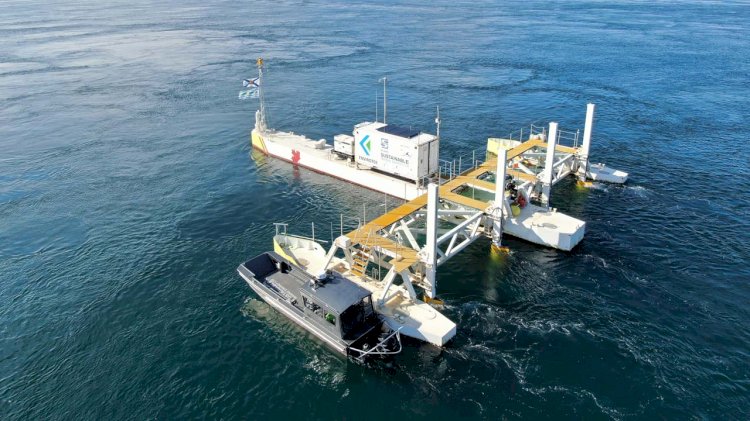 Sustainable Marine Energy (SME) and Minas Tidal LP (MTLP) have agreed to co-develop their adjacent berths at the Fundy Ocean Research Center for Energy (FORCE) and will utilise SME’s PLAT-I floating in-stream tidal energy technology to deliver up to 9MW of tidal energy to the Nova Scotia grid.

The combined project is to be called the Pempa’q In-stream Tidal Energy Project and will be delivered in phases starting next year. For Phase 1 SME will deliver three next generation PLAT-I platforms, each producing up to 420kW, providing a combined capacity of 1.26MW.

Sustainable Marine Energy (Canada) was recently awarded a license by the Nova Scotia Department of Energy and Mines (NSDEM) which allows energy generated by the three tidal energy systems to be sold via a power purchase agreement (PPA) to Nova Scotia Power.

Project financing for the first phase through equity and debt is being provided by Hamburg-based reconcept Group. The asset manager specialising in renewable energy investments has been advising on the project and is establishing a capital fund specifically for this purpose. reconcept will also be supporting the financing of further phases of the project, to enable the delivery of the full 9MW of capacity provided by the two berths.

“Tidal power has great potential, especially in the Bay of Fundy, and can help answer the challenges of the climate crisis. The major advantage of tidal power plants is their predictable and reliable output - this is very compelling from the investor's point of view. We expect attractive returns for our German co-investors.”

"Reaching this point has been a team effort and made possible by the strong support provided by key stakeholders in both Europe and Canada.

Over the past three years we have focused on developing and proving up our technical solution which has been strongly supported by our major shareholders; SCHOTTEL and Scottish Enterprise. This enabled SME to build and test the first PLAT-I demonstrator in Scotland, and since this time last year we have continued the testing in Nova Scotia, at Grand Passage, in preparation for our entry into FORCE.

The FORCE site is renowned for its incredible tidal resource, but this also makes it a very challenging environment in which to deploy equipment. The lessons learned from our deployments in Scotland and Nova Scotia have helped us to prepare for this project.

A supportive and stable market environment is required to enable the transition from R&D into an industry that can deliver commercially viable, abundant and predictable clean energy. We would like to thank the Government of Nova Scotia for remaining steadfast in their support of tidal energy. This enables us to continue our staged approach to delivering our objective; reducing the cost of tidal energy.“

The President of MTLP, Mark Savory, who has been appointed as President of the Spicer Marine Energy joint venture stated:

“In conjunction with our partner Minas Energy, a founding berth holder at FORCE, we have evaluated a number of potential technologies for developing our project over the years."

SME have demonstrated an innovative and robust solution which offers unrivalled access to key components for maintenance which will help reduce lifecycle costs and is essential for de-risking early-stage projects. Combined with the demonstrated ease of installation when compared to other technologies, this provides us with a high degree of confidence. We have scrutinised SME’s next generation design; they have adapted their system to deal with the conditions present at FORCE and have increased the rated output by 50% with only a small increase in the size of the platform. This makes us very optimistic about the commercial potential of their approach.

When questioned about the significance of the project’s name, Savory responded:

“Here, in Nova Scotia, we are conducting our activities in an area that is home to the Mi’kmaq First Nation. In the Mi’kmaq language, pempa’q (pronounced bembaahk) is the name for the rise of the tide, which we feel is especially representative of the environment we are working in. The Bay of Fundy is famous for its large tidal range, which creates the strong tidal streams through the Minas Passage that we are using to generate renewable energy.

FORCE is located on the Parrsboro Shore, which in the 1800’s had very prosperous shipbuilding industry, that used the rise of the tide to launch their vessels. Now we are using the rise of the tide in the Bay of Fundy to launch a new, sustainable industry which will bring economic prosperity to the area in an environmentally responsible manner, that respects the values of Indigenous communities, many of whom are becoming more and more involved in the development of the renewable energy projects in Canada.”