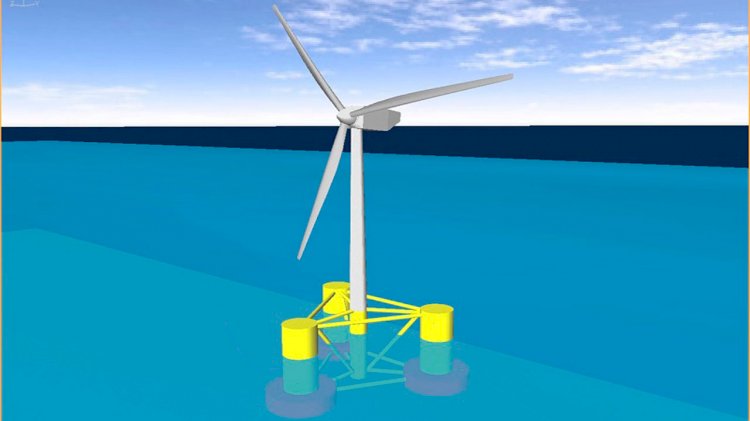 Wave simulation specialists hope to make offshore wind turbines in deep water more financially feasible by researching the best way to stabilise the floating pontoons they would have to sit on.

Static turbines can be fixed to the ocean floor near the coast but the cost and infrastructure complexities of doing so further out to sea mean they would have to be instead mounted on tethered buoyant platforms – exposing them to high winds and large waves.

Academics from Manchester Metropolitan University have won a £124,000 grant to develop computer models to test the best methods to stabilise and control the motions of the turbine and its semi-submerged support structure.

Dr Ling Qian, Reader in Computational Fluid Dynamics at the Centre for Mathematical Modelling and Flow Analysis at Manchester Metropolitan University, and the lead academic of the project, said:

“At the moment most offshore wind turbines are fixed-bottom devices that are secured directly to the seabed and normally it is located not very far from the coastline. But if you’re close to the shoreline you get lots of people objecting to the construction of a wind farm. If you want to locate wind turbines far away from the shore at a water depth of more than 50m, a fixed-bottom turbine becomes a very expensive and challenging engineering project.

So we need to develop a floating offshore wind turbine that works in water deeper than 50m, but that leaves the top-heavy turbines exposed to being buffeted by high winds and rough seas even if the buoyant support system is attached to mooring lines anchored to the sea floor.”

Based on a code they have developed themselves, Dr Qian and colleagues will use the University’s high performance computer cluster to run a computer simulation of waves interacting with a platform based an existing design for floating support structures.

The design comprises three connected columns 50m apart, creating a triangle frame in which the turbine sits, keeping the majority of the mast above the surface of the water.

It is manufactured separately from the turbines – which are typically 130m high with a blade length of between 60m and 90m – and the two are bolted together on location.

Even if it was possible to fabricate an all-in-one system it would just be too large to transport anywhere.

Dr Qian said representative waves from the North Sea will be used in the computer simulation.

The Manchester Metropolitan University team’s model will uniquely incorporate two proposed stabilisation measures, first testing with one and then adding the second:

“Under extreme wave conditions such as during storms, floating platforms will undergo large movements and sometimes this movement is dangerous and leads to system damages. Therefore, we need to make sure the device can survive such storms with large waves. On the other hand, in order for the wind turbine to operate optimally we also need to control its motion. There is already one commercial floating offshore wind demonstration project in the UK, a test farm off the coast of Scotland near Peterhead, but to enhance the technical viability and to drive the cost down, further fundamental research is still needed.
In this project, we will look at some novel and cost effective techniques to stabilise a floating system so it can operate under high sea states and survive the worst impact.”