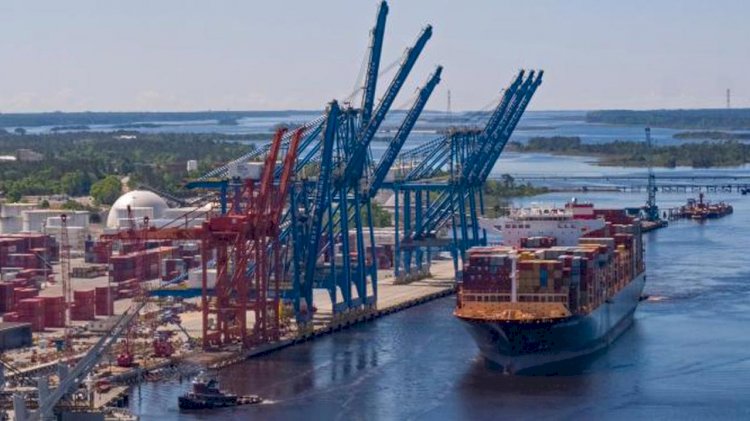 A new air draft over the Cape Fear River will make it easier for ultra-large container vessels to reach the Port of Wilmington.

The new allowable air draft has been increased to 212 feet. The air draft clearance will allow ships with a carrying capacity of 14,000 TEUs (twenty-foot-equivalent unit) and greater to safely and efficiently navigate to Wilmington.

“This project was critical for North Carolina Ports’ long-term success and further accentuates our big ship readiness capabilities. Not only does it open the Port of Wilmington to some of the largest ships calling on United States East Coast, but it allows NC Ports to better support the needs of its customers.”

The four-month, multi-million-dollar project led by Duke Energy consisted of upgrades to the transmission towers in the Cape Fear River and the replacement of existing lines. Altogether, the improvements raised the transmission lines a total of 41 feet.

“This was a strategic decision to virtually eliminate air draft issues that other ports in the southeast continue to face due to bridge restrictions. Our partner on this project, Duke Energy, recognized the critical need for this upgrade and worked diligently to create a solution.”

“We are working hard to meet the energy needs of customers now and in the future. Through our strong partnerships on this project, we are helping to keep Wilmington competitive with other East Coast ports and support economic growth across the state.”

The completion of this project comes as North Carolina Ports continues to push forward with its more than $200 million capital improvements plan. Infrastructure improvements include a wider turning basin, berth enhancements and an overhaul of Wilmington’s container terminal. The terminal renovations will double the port’s annual throughput capacity to 1.2 million TEUs and triple its refrigerated container capacity to 1,000 plugs.

CTA recertified as the only climate-neutral container terminal...

Viewport3 team working remotely on projects based in Norway, the Mediterranean,...

With the first vessel to be handed over by the end of 2022, deliveries will be completed...

Starting from May 4th, 2020, DFDS offers its customers cargo services on Eckerö...

Arcadis Ost 1: construction of platform kicks off at Gdansk...

The offshore substation for the Arcadis Ost 1 wind farm, with a planned capacity...