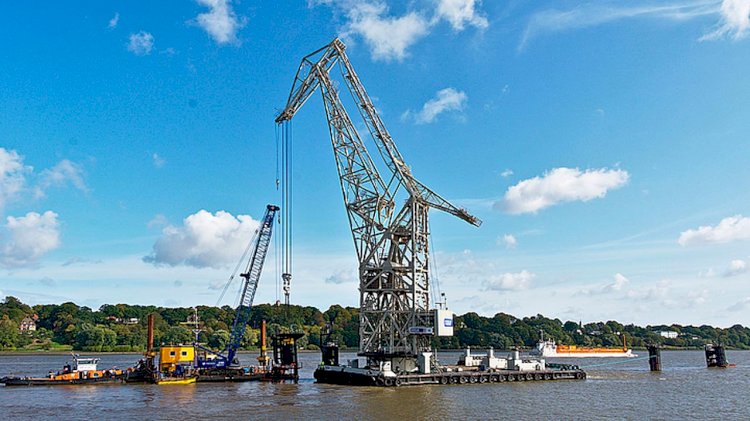 HHLA’s floating cranes transport 42-metre-long pipes which will be embedded into the bottom of the river Elbe to create additional waiting points for ships.

The waiting point for large ships by Finkenwerder is currently being expanded. Beginning in 2020, two ships that are 400 and 450 metres long will be able to moor there simultaneously – for example, while they wait to enter the passing place that is currently being built near Wedel. For this purpose, thirteen additional metal poles used to moor ships, known as pilings, will be driven into the riverbed of the Elbe close to the Airbus plant. The floating cranes “HHLA III” and “HHLA IV” tranship and transport the required pipes and heads for the pilings. Measured in working days and revenue, this is one of the largest projects of the past few years for the two floating heavyweights.

“We are delighted that we can make a contribution to the dredging of the Elbe with our floating cranes, thereby helping Hamburg get in shape for the ultra large ships.”

He notes that the contract demonstrates the floating cranes’ performance once again, underscoring their importance for Hamburg’s all-purpose port.

The HHLA equipment has a heavy programme, probably until the end of September: The piles have a length of up to 42 metres and weigh a maximum of 108 tonnes. They were brought to Hamburg by ship from Swinemünde. With the help of the floating cranes, they were unloaded horizontally at the Rosshafen terminal, erected, and finally transported individually to the construction site approximately nine kilometres away. Since the heads of a few old piles will be replaced as part of the operation, the floating cranes also removed 25 piling heads, each weighing up to 55 tonnes. Some of them were temporarily stored at Rosshafen and transported from there to the construction site for assembly.