Freeport of Riga Authority completed reconstruction of the FG levee 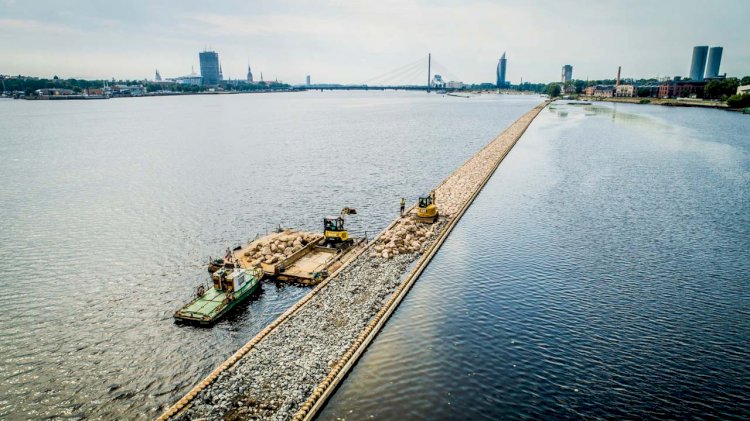 Photo: The Freeport of Riga Authority

The Freeport of Riga Authority has completed reconstruction of the FG levee, an embankment built to protect the main waterway. It is located in the territory of the Freeport of Riga, on the left bank of River Daugava, and stretches over a total distance of 1.51 km.

The FG levee was built from 1889 to 1891 to tame the current along the left bank of River Daugava, and together with the CDE levee it is part of the levee system to fortify the riverbed and enable construction of the port. The levee system is essential for safe shipping in the Port of Riga, as it protects the main waterways and access to Riga Passenger Terminal from landslides.

Except for minor repairs in some parts of the FG levee, it was used for more than 120 years without any substantial renovations.

Its structure is made of interlinked wood pile walls filled with boulders. As the joints are located in an area where the water level tends to fluctuate, wooden structures are subjected to rotting and ice impact. When this site was inspected, significant damage was found: wooden constructions were missing, piles on Daugava side were broken off for as long as 400 m, and the boulder filling had slipped off which could have led to disintegration of the levee.

In August 2017, at the request of the Freeport of Riga Authority, reconstruction of the FG levee started. During the works, its supporting structures were replaced by constructing new wood pile walls along the current levee, and the levee was refilled with boulders and smaller stones, and covered with rocks.

The FG levee is a culturally and historically significant engineering structure, a part of the urban construction heritage site ‘Ķīpsala historic district’ designated as a site of national significance. Its reconstruction plan was approved by the National Agency for Protection of Cultural Monuments.

Cavotec to equip two berths with its APS for charging of...