As a result, the transport of sustainable electricity from the wind farm to the coast could continue without failure. 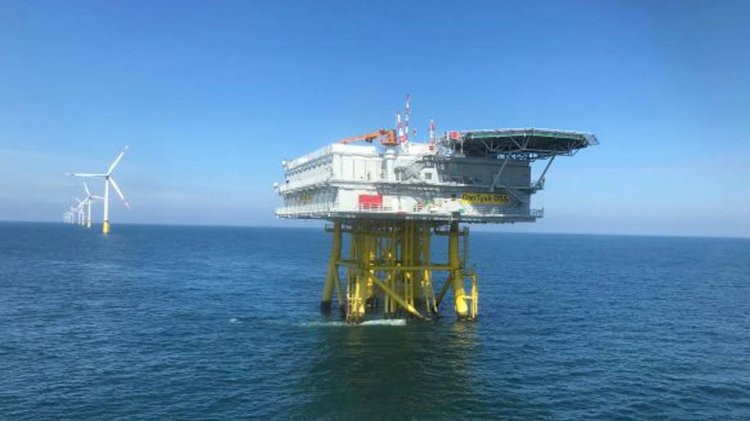 Bakker Sliedrecht has succeeded in upgrading the automation system at the offshore energy substation of Vattenfall’s DanTysk wind farm in the North Sea without any downtime. As a result, the transport of sustainable electricity from the wind farm to the coast could continue without failure.

DanTysk is located in the German part of the North Sea and comprises 80 wind turbines. With a total output of 288 megawatts, up to 400,000 households can be supplied with sustainable electricity. The wind farm has been in operation since 2014. The generated power from the wind turbines is transported via 108 kilometers of cables to its own energy substation. On this platform, the power is converted from 33 kV to 155 kV and transported further. First to a converter station and then to the high-voltage grid of grid operator TenneT on the coast, 200 kilometers further on.

At the construction of this substation in 2012 and 2013, Bakker Sliedrecht supplied various components and integrated all systems within the electrical & instrumentation system. Improvements to the system were desired and had become available, so were taken into account during the upgrade of the system.

“It can be compared to a large transformer station. The remotely controlled automation system controls and monitors the essential functions on the platform, such as the cooling system and the cooling water pumps. That is of crucial importance on a platform where 288 megawatts of energy is brought together.”

Bakker Sliedrecht replaced, among other things, the Ethernet switches in the fibre optic ring for the communication between all systems, the switches, redundant SCADA servers and redundant PLC controllers that control the platform. This had to be done without shutting down the energy supply from the entire wind farm.

“That is why we have built a whole new network next to the existing one and have started testing it step by step. First we transferred the less critical systems. Only when they worked well we moved on and transferred the next systems and eventually the critical ones. That went well.”

The entire automation system at the substation was upgraded under full load without failure.

“We’ve spend less time on the platform with our people and had no downtime. We often replace and upgrade these types of systems, but projects of this size with minimal downtime are special. With this, Bakker Sliedrecht has made its mark.”

“We experienced the corporation with Bakker in a very professional way. On site technician and project manager have been experienced and very skilled in there key competencies. The cooperation between our in house expert and the specialists of Bakker Sliedrecht went very smooth. Overall result has been very satisfying. The cutover to the new hardware was realized without any loss of production.”