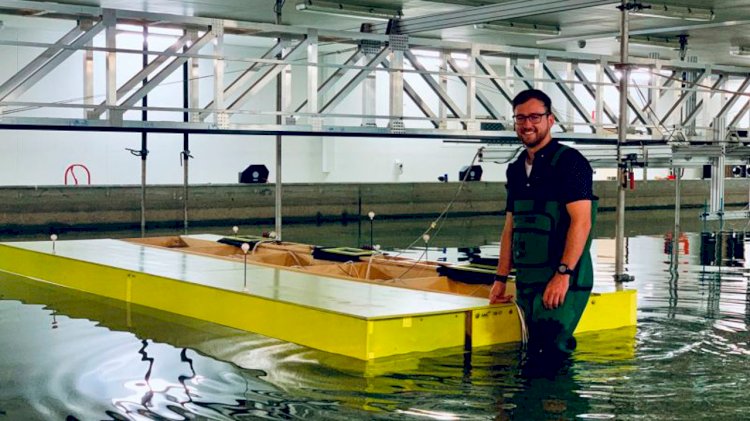 Wave energy may be generated in the future from breakwaters, harbours and other maritime infrastructure if research by AMC PhD student Damon Howe checks out.

The research is looking at whether integration of wave energy devices into coastal infrastructure such as a floating breakwater can be viable.

In particular he is looking at the potential to generate energy using Oscillating Water Column (OWC) Wave Energy Converters (WECs) which operate in a way which has been described as “an artificial blowhole”.

He has carried out nearly 2000 experimental investigations in two separate episodes in July/August 2018 and in January 2019.

“The results thus far are positive for integration of the Oscillating Water Column Wave Energy Converters into the floating breakwater. We got really good results and found that we were able to nearly double the energy absorption from our device by integrating it into the breakwater. So that would be really good for a coastal region or a harbour where it could potentially serve a multiple purpose. Recent research had been into the performance of the device in irregular seas. The results of this analysis are also very positive.”

The Bachelor of Ocean Engineering graduate has found the 35 metre by 12 metre and one metre deep AMC Model Test Basin to be the ideal facility for the research.

He said the AMC Model Test Basin has the ability to generate waves of up to 200 mm high at the operational water depth explored during his investigation.

“We are able to generate relatively big waves when operating at our intended water depth, and when you have bigger waves you are able to investigate both the performance and survivability of different device concepts and that is very important area for offshore renewables research."

Mr Howe said the experimental model had up to seven OWC wave energy converters each of which produce bi-directional air flows:

The research also looks at the integration of the OWC wave energy conversion technology into offshore floating maritime structures where a seabed foundation is too expensive.

“If we can move these devices offshore they could serve other industries as well. It could be something that could serve the aquaculture industry which is actively looking to move offshore.These floating breakwaters will be multi purpose providing protection for fish pens, a foundation for storage of fish food and equipment as well as generating power at the precise location it is required for these operations -thus no need to connect to any shore based electricity grid.

The concept is trying to couple two beneficial structures together where we get wave energy out as well as provide storage facilitation and protection of the fish pens from storm conditions."

Damon Howe hopes that the work I have completed and the results of my investigations can be utilised throughout the Blue Economy CRC to develop an offshore energy solution.

New rules on medical examinations of seafarers and fishermen in Denmark