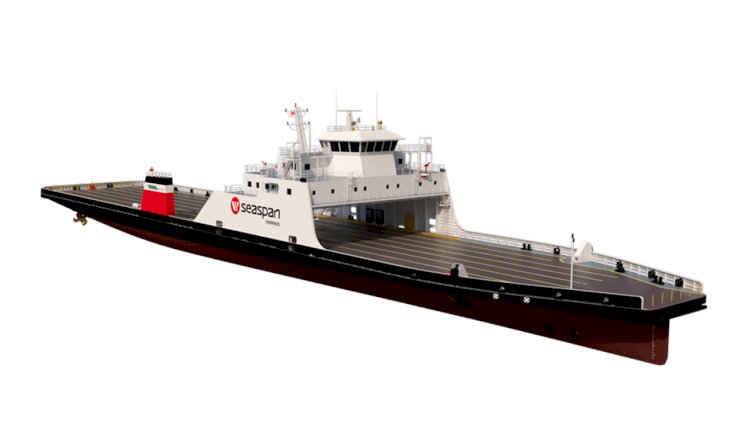 Corvus Energy is pleased to announce that Seaspan Ferries has selected Corvus Energy to supply a 2034 kWh Orca Energy system for each of its newbuild LNG-battery hybrid ferries currently under construction.

Seaspan will also operate the new roll-on/roll-off (Ro-Ro) ferries on its coastal routes in British Columbia. The Corvus batteries will contribute to significant reduction in emissions, fewer running hours on the engines, and faster response to load variations.

“Seaspan Ferries is striving to gain maximum efficiencies with our new fleet which are larger than our existing vessels. The additional cargo takes more time to load. The only chance to make up time the increased time from loading is with vessel speed. Instead of putting in larger engines to allow for greater speed and faster acceleration and deceleration, we’re going to use batteries to share the higher load and assist during manoeuvring.”

The batteries will be delivered through Aspin Kemp and Associates (AKA), a Canadian company that designs, manufactures, installs and supports innovative power generation and energy management solutions for marine and land-based industries in strategic partnership with MAN Energy Solutions.

This is the second pair of ferries that Seaspan has equipped with Corvus batteries. Seaspan Reliant and Seaspan Swift went into operation in 2017. The 546 kWh Corvus batteries saved Seaspan the cost of an additional engine for spinning reserve, as well as improved fuel efficiency by 9%-10%.

“We are very pleased that Seaspan has again selected a Corvus energy storage system. Corvus may be a global leader in marine energy storage solutions, but we are very committed to the local marine industry as well. We firmly believe the North American market will grow in the coming years. For that reason, we are proud to deliver Canadian batteries on board Canadian vessels alongside a Canadian integrator.”

As the leading manufacturer of energy storage systems for maritime applications, Corvus Energy provides battery power to more hybrid or all-electric ferries than all other providers of energy storage systems combined. Corvus offers the innovative Orca ESS solutions portfolio and has unsurpassed experience from 250+ projects, totaling over 230 MWh and more than 2 million operating hours.