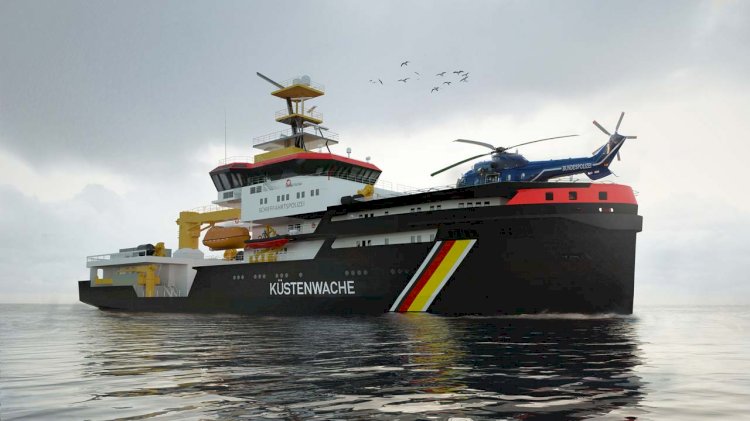 Rolls-Royce is supplying the gas-shielded propulsion system for two new multi-purpose vessels to keep them operational even under difficult conditions.

In future, the 95-m special ships will be called out on the North and Baltic Seas to deal with accidents, fires or unable-to-maneuver vessels. They are being built for the German Federal Waterway and Shipping Administration by Abeking & Rasmussen, the ship and yacht yard based in Lemwerder, Lower Saxony. The vessels are replacing their predecessors, the Scharhörn and Mellum, after 46 and 36 years of service respectively. The ship technology division of the Federal Waterways Engineering and Research Institute was commissioned with planning, design and tendering and now with construction management.

The two ships are powered by gas-electric propulsion systems based on four medium-speed Bergen B36:45L6AG units from Rolls-Royce, each delivering 3,600 kW. Rolls-Royce is not only engine and generator supplier, but provider of a special solution in the form of the gas protection specially developed to allow the engines to remain operational even if, for example, the ambient air has been contaminated with explosive gases following a gas tanker accident.

"Obviously the engines are there to burn gas, but if gas gets into the combustion chamber in an uncontrolled way via the intake air, the engine will become unmanageable."

With the system Rolls-Royce has developed, the engine power output is adjusted in relation to the amount of gas in the intake air. In short, the more gas there is in the intake air of the engine, the less gas fuel is fed to the engine via the gas control valves. If the gas volume is too high, special quick-acting flaps shut off the intake of gas and air and the engine comes to a stop.

"With these ships, we’ve combined the decades of experience we have under our belt in the field of medium-speed gas engines from Rolls-Royce with our highly specialized gas protection expertise to create an effective solution for our customer."

Indeed, Rolls-Royce is the only manufacturer worldwide able to supply such powerful engines with gas protection and the relevant certification. They have already proven their worth in sea rescue cruisers, pollution control vessels and most recently in the Nordic, the North Sea emergency tug. Rolls-Royce has been supplying medium-speed gas engines for over 20 years.

"Rolls-Royce was the only manufacturer worldwide able to utilize its long-standing experience in this specialized field and develop gas protection for straightforward gas engines, all in line with our schedule requirements and backed up by the relevant feasibility study."

The two predecessor vessels – the Scharhörn and the Mellum – were likewise powered with MTU-brand engines from Rolls-Royce. Jörg Fischer-Felsberg, Director of Sales and Service for MTU products in Germany, said:

"The customer was impressed not only by MTU propulsion, but by the quality of the service we provided, and that swayed his decision in our favor."

In the event of an emergency, the new ships, capable of speeds over 15 knots, will be at the accident scene in no more than  two hours. Equipped with emergency towing capabilities with 145 tons bollard pull, chemical tanks, an explosion-proof safety and container cargo hold, as well as oil collection equipment such as skimmers, oil-holding tanks and a separation room, they are able to accomplish the most challenging missions. Not only the engines, but the entire ship is gas-protected. If it enters a dangerous zone in which there are flammable or health-endangering substances in the air, the crew must switch the ship to gas-protection mode, meaning that windows and doors must be sealed gas-tight. This creates a citadel into which clean air is pumped. The resulting overpressure ensures that no more toxic  air can enter.

That gas engines are being used in this project is owing to a German government directive that requires a massive reduction in CO2 emissions from governmental vessels. Enak Ferlemann, Parliamentary State Secretary to the Federal Minister of Transport and Digital Infrastructure, said: