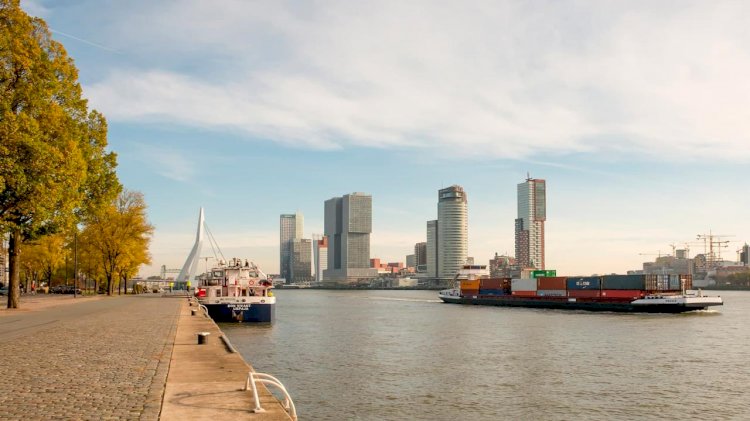 Five commercial parties will be taking part in a pilot project set up by the municipality of Rotterdam and the Port of Rotterdam Authority at Parkkade in central Rotterdam: ENGIE Ventures & Integrated Solutions BV; PON Power & its subsidiaries; Aggreko Benelux; Mobiele Stroom BV and JP Energy Systems. The project will focus on various mobile shore-based power solutions for sea-going vessels.

Shore-based power has been compulsory for ships docking at Rotterdam’s more than 500 inland berths for years. However, this will be the first pilot project involving mobile shore-based power for sea-going vessels.

Sea-going vessels need electric power during a port call. Usually, this is generated by their auxiliary engines – resulting in emissions and in some cases noise nuisance for the surrounding area. This nuisance can be reduced by powering down the vessels’ auxiliary engines and providing them with external power: shore-based power, also known as ‘power to ship’ or P2S. Shore-based power is relatively expensive, and it’s difficult to operate fixed connections to the power grid on a profitable basis.

“This pilot project with shore-based power for sea-going vessels aligns with the Port Authority’s ambition to be a frontrunner in the energy transition. It is one of the many projects that we are working on to improve local air quality and mitigate global climate change.”

The five project participants will be testing a variety of concepts. The focus will mainly be on their technical and commercial viability, user-friendliness and positive environmental impact:

The pilot project will start in the autumn and will run until spring. Each system will be installed for 2 to 4 weeks at a location halfway along Parkkade, where it will supply shore-based power to sea-going vessels mooring at a specific berth. During the tests, researchers will perform measurements to determine the reduction of noise and emissions achieved by the different systems, compared to the vessel’s on-board generator.

The pilot project will be set up at the public berths for sea-going vessels on Parkkade, close to Rotterdam’s city centre. This port basin is frequented by numerous coasters operated by shipping companies like Wilson, Vertom and Wijnne Barends. In principle, any sea-going vessel that moors at this location can make use of the mobile shore-based power – although quite a few sea-going vessels lack the plug connector required for this.

The mobile shore-based power pilot project comprises a number of phases. After successfully completing Phase A, the researchers intend to immediately move on to its follow-up, Phase B. This phase will mainly focus on arranging shore-based power for larger sea-going vessels.

The VHF for marine use has been updated with a new function called Block Channel...