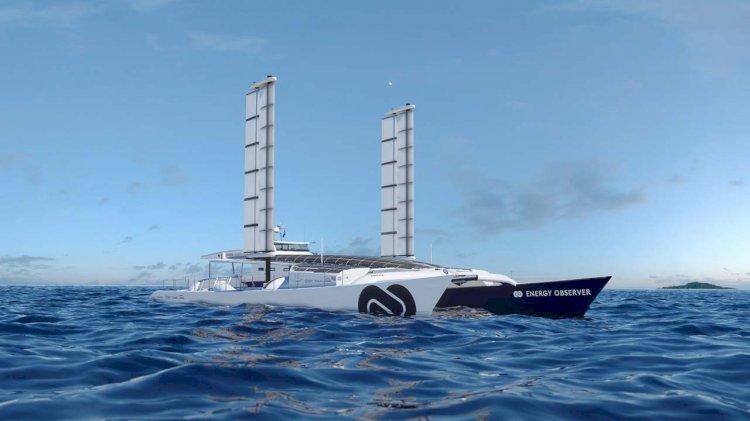 Energy Observer, the first vessel powered by renewable energies and hydrogen, cast off on her epic 4-year round the world voyage.

Aboard the boat on leaving Saint Malo in northern Brittany is a substantial team that includes her two historical leaders, the two captains, the ship’s engineers as well as engineers from Energy Observer Developments, who will be present to keep an eye on the setting in motion of all the innovative systems in what still promises to be a difficult sea state as far as Portugal.

A boisterous introduction awaits then, but it’s a key phase in the bid to make the most of a small weather window in the slew of storms sweeping across the North Atlantic in recent weeks.

On the horizon is a highly colourful 2020, which will see the French vessel cross 2 major oceans and make 9 stopovers, with its two leaders, Victorien Erussard and Jérôme Delafosse, helping to relay the Olympic flame to Japan in early July.

After 3 years navigating her way round Europe having all her on-board technologies tested and developed, Energy Observer has been further optimised over the course of the winter. Equipped with a new Toyota fuel cell, additional solar panels, now notably vertical and using screen-printing technology (increasing the park’s total surface area to 202m²), as well as new variable pitch propellers and two optimised and fixed Oceanwings®, Energy Observer, which is powered by a combination of several sources of renewable energies and a green hydrogen-fuelled production and storage system, is all systems go for her future sea passages, completely self-sufficient in energy.

Some key stopovers to document the revolution in energy and hydrogen and meet up with more protagonists involved in ecological transition.

There are 20,000 nautical miles or nearly 37,000km to be covered in 2020, which equates to nearly the circumference of the earth. After Morocco or the Canaries, then on to Saint Barthélémy in the French West Indies. The negotiation of the Panama Canal (and a stopover in the eponymous capital) will enable the crew to make Hawaii and finally Tokyo, from 24 July to 9 August, during the Olympic Games. 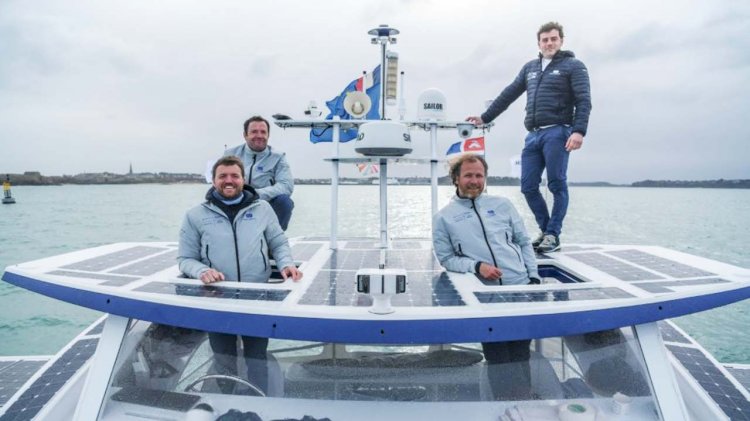 “These Games, where the dominant theme is hydrogen, will be the opportunity for Energy Observer to bear witness to a series of spectacular initiatives in this direction! For example, considerable investment has gone into developing infrastructure and transport. In this way, the government has set itself a target of having 40,000 vehicles running on fuel cells in circulation in the country this year and no fewer than 800,000 by 2030. A prime example of clean mobility!”

The fuel cell already equips over 250,000 Japanese households for their energy supply. Several hydrogen production facilities have already been installed. Air Liquide is a key protagonist in this transition, with a profusion of infrastructure projects, and Toyota will supply  some 500 hydrogen cars, as well as around a hundred hydrogen buses during these Games.

As such, like its Korean and Chinese neighbours, Japan has witnessed a sea change in the hydrogen revolution, and Energy Observer is keen to bear witness to this clean, respectful, decentralised, digitalised society that is self-sufficient in energy and to which future generations aspire.

After this historic 3-week Japanese stopover, another Pacific crossing will follow, destined for California with three main stopovers, San Francisco in October, Los Angeles in November, and San Diego in December.

“Today this State is demonstrating a remarkable pioneering spirit in terms of energy and ecological transition, in a country largely fuelled by hydrocarbons elsewhere. The State of California, which is particularly exposed to climate change, water stress, large fires and a rise in water levels, has switched course and now invests heavily in sustainable solutions, which we’re eager to document through our audiovisual productions.”

NCL to set sail for all seven continents including Antarctica