A revision of the air draft restriction level at Tsing Ma Bridge has been determined by the Hong Kong Government. 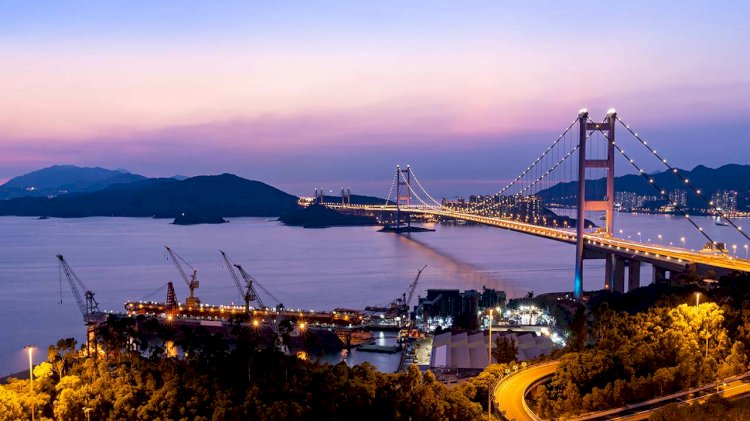 The move, which raises the air draft to 57m from the previous 53m restriction, comes after years of consultation, and has the potential to attract millions of additional containers to Hong Kong.

“As an international maritime centre, Hong Kong seeks to provide a facilitating environment for maritime and port business operation in support of the international and local shipping community.  One of our upcoming measures would be to revise the air draft restriction level at Tsing Ma Bridge so as to facilitate mega container vessels to pass through the Ma Wan Fairway to access the Hong Kong Port and other ports in the western and central parts of the Pearl River Delta Region.

Tsing Ma Bridge is the only land and rail link connecting the Hong Kong International Airport and other parts of Hong Kong.  Since it began operations in 1997, an air draft restriction of 53m above sea level has been specified in the law as the maximum height clearance for safe navigation below the bridge span. In view of the increasing use of mega vessels by the shipping sector, there have been calls from the industry to review the existing air draft restriction of the Bridge.

Having carefully considered the possibility of relaxing the air draft restriction, we will revise the existing limit from 53m to 57m above sea level.  We have briefed the trade on the proposed implementation arrangement and are working on the legislative proposal to amend the relevant provisions in the Shipping and Port Control Regulations (Cap.313A) and the Merchant Shipping (Local Vessels)(General) Regulation (Cap.548F). Upon completion of the exercise, we will introduce the legislative amendments into the Legislative Council to implement the relaxation."

According to a consultants’ report commissioned by the Government three years ago it was estimated that in 2014 maybe 1m teu had been affected by the restrictions relating to the Tsing Ma Bridge leading to a possible loss of value added of HK$0.8bn and around 2,000 jobs.