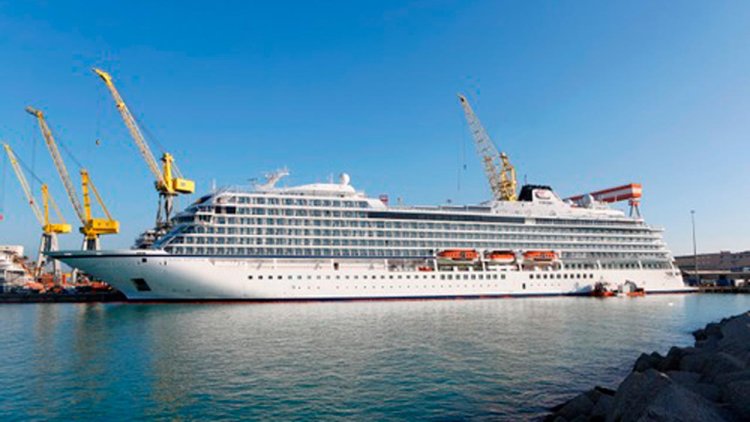 “Viking Neptune”, the newest ocean cruise ship which Fincantieri has built for the shipowner Viking, has been delivered at the shipyard in Ancona. The unit is placed in the small cruise ship segment. As its sister ships, she is about 47,800 tons, with 465 cabins to accommodate up to 930 passengers.

“Viking Neptune”, ninth of this class, marks a quantum leap in the longstanding cooperation between Viking and Fincantieri for designing, delivering and operating environmentally considerate cruise vessels. The two companies, indeed, keep on cooperating for developing pioneering applications based on hydrogen fuel cells, aiming to achieve an increasing reduction of GHG emissions.

“Viking Neptune” embodies the first result of such cooperation, as a hydrogen fuel cell module, with a nominal power of 100 kW, has been fitted on board as a test. Such installation is particularly important for tuning technological devices and developing rules and regulations for use of hydrogen on board a cruise vessel.

This year Viking and Fincantieri have also strengthen their collaboration going beyond the joint R&D activity and aiming to develop large scale hydrogen applications, significantly contributing to the reduction of GHG emissions of the vessels. As a first step the two companies have designed an enlarged vessel configuration (to be applied to the vessels to be delivered after 2024), defining spaces and arrangements for accommodating the increased size of hydrogen tank, the fuel cell systems and relevant auxiliaries.

The second step will be the development of a hydrogen-based generation system with a total power of about 6-7 MW, (the largest size ever tested on board a cruise vessel) and able to ensure smokeless port operation and slow steaming navigation. Such systems, once finalized, could be installed on the vessels under construction and, as far as possible, retrofitted on the vessels already delivered.