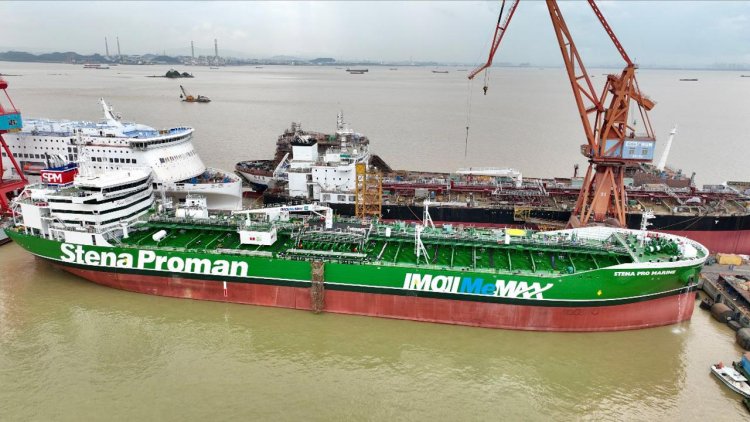 Proman Stena Bulk, a joint venture (JV) between a leading global methanol producer Proman and one of the world's largest tanker shipping companies Stena Bulk, has today announced that its second methanol-powered newbuild tanker, Stena Pro Marine, has been delivered.

The growing momentum behind methanol-powered vessels across the shipping industry in recent weeks highlights methanol's key advantage as a globally available cleaner marine fuel: its proven net-zero pathway allows shipowners to invest in vessels that are already futureproofed.

As well as enabling immediate greenhouse gas emissions reductions, CO2 emissions can be steadily reduced by blending increasing quantities of low-carbon and renewable methanol in the coming years, without any changes to engines or wider infrastructure.

Both 49,990 DWT IMOIIMeMAX dual-fuel mid-range (MR) tankers were built at Guangzhou Shipyard International Co Ltd (GSI) in China. Stena Pro Marine, like Stena Pro Patria, is expected to consume 12,500 tonnes of methanol per annum. The use of methanol onboard virtually eliminates local pollutants including SOx and Particulate Matter (PM), cuts NOx emissions by 60% and reduces CO2 emissions by up to 15% on a tank to wake basis versus conventional marine fuels.

"Vessels such as the Stena Pro Marine demonstrate to shipowners and policymakers that the industry can take proactive and immediate steps on the decarbonisation pathway.

"Proman and other producers are ramping up investments in low-carbon methanol technologies and renewables projects to meet rapidly expanding customer demand. As regulators continue to propel much-needed maritime decarbonisation, including the EU's 'Fit for 55' legislative package, these vessels underline the importance of a regulatory framework that relies on one certification methodology for alternative fuels and accurate emission measurements of all fuels, including reduced carbon-intensity fossil-origin products, which play an important early role in accelerating the switch to cleaner fuels and enabling the pathway to net-zero."

First of new Damen Shoalbuster named in ceremony at Damen...