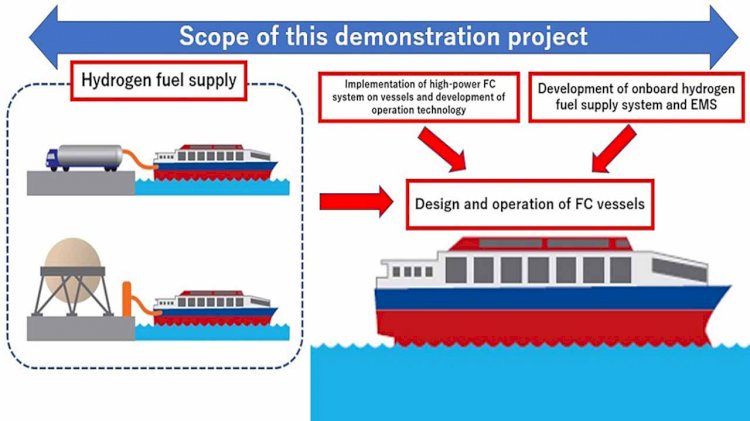 The project, which will begin in September2020, is Japan's first effort to develop a commercially available FC vessel and carry out a demonstration operation involving the supply of hydrogen fuel. By using FCs as a power source, it will be possible to completely eliminate greenhouse gas (GHG) emissions during navigation.

The Companies will develop an about150 ton class (i.e. passenger capacity: approx.100) high-power FC vessel that will function as a medium-sized tourist ship, and in 2024 carry out a demonstration operation of the FC vessel together with a demonstration supply of hydrogen fuel. The Companies will begin an FC vessel and hydrogen-fuel-supply feasibility study in September2020 and start designing the vessel and hydrogen-fuel-supply equipment in 2021. Construction and production is expected to start in 2023, and pilot operation of the vessel along the coast of Yokohama port is scheduled to begin in 2024.

With the entry into force of the Paris Agreement in 2016, global momentum for decarbonization has increased, and reducing GHG emissions has become an issue in the shipping sector. In 2018, the International Maritime Organization (IMO) set a goal of halving GHG emissions from the international shipping sector by 2050 and reaching a target of zero as early as the end of this century. The utilization of FC systems in transport beyond passenger cars is cited as an issue in the action plan of industry, academia, and government for the realization of a hydrogen society in the “Strategy for Developing Hydrogen and Fuel-Cell Technologies '' formulated by the Japanese government in 2019. From the development of small FC vessels (gross tonnage less than 20 ton) that have already been promoted in Japan, the spread and expansion of high-power FC to larger vessels is expected.

The Shetland HVDC Link will be the first transmission connection between the Scottish...