In the near future, liquid gas from LNG carriers can be regasified and then fed into the German gas network via this Floating Storage and Regasification Unit (FSRU). 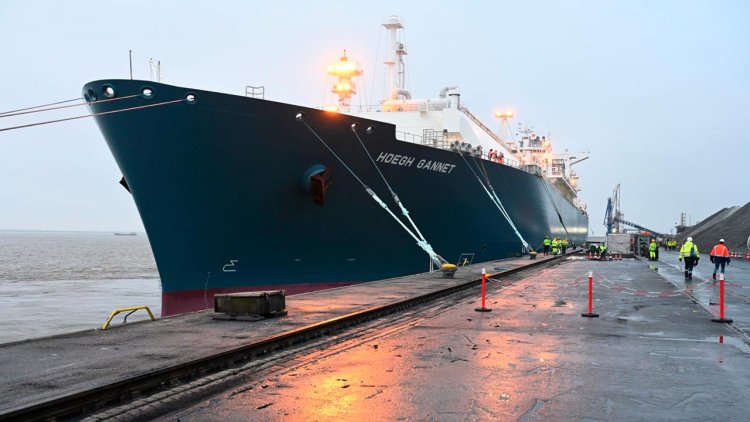 The entire project was implemented in record time. Since May 2022, RWE has forged ahead on behalf of the German government to implement the project together with its partners Höegh LNG, Marine Service, Reganosa and Brunsbüttel Ports GmbH. By mid-October, the planning and approval phases were already at a stage at which construction works could be started. In addition to the participating companies, the approval authorities, who worked very rapidly and effectively, also played a key part in this success.

“Floating LNG terminals enable the import of gas and thus strengthen Germany’s security of supply. The strong energy dependence of our country on Russian pipeline gas will end with the deployment of the special vessels. The high speed at which the project in Brunsbüttel was jointly driven forward by all involved parties sets standards for the further modernisation of our energy supply. This will also be necessary to ensure that Germany as an industrial location becomes climate-neutral as soon as possible.”

“Höegh LNG is honored to be a partner to the Brunsbüttel LNG import terminal project, a project which aligns with our belief that floating LNG infrastructure is the key to solving the current energy crisis.”

“Ten years of preparatory work now culminate in the implementation of this project. As the owner and operator of Brunsbüttel’s Elbehafen, we are delighted to welcome the FSRU in our port today. With its three ports in Brunsbüttel, the port and industrial site of Brunsbüttel is not only a universal freight hub, but also an important energy hub for the entire Federal Republic. With the establishment of a versatile and independent energy import infrastructure for LNG and green energy sources this, Brunsbüttel now has a key role to play in Germany’s future security of supply.”

Following the arrival of the FSRU, a several-week phase of commissioning and trial operations will now begin, during which the vessel will leave its pier again temporarily. The trial operations will include connection to the newly built gas pipeline so that first gas volumes can be fed into the German gas network from the beginning of February. The gas volume will increase continuously as further technical components from the new technical infrastructure and warm water supply installed in the past few months are added.

International specialist company Reganosa will take over the operation and maintenance of the new land-based infrastructure. Owner Höegh LNG will operate the vessel. Marine Service GmbH supports the project with technical know-how as a development partner for the terminal design. The heat required for the regasification process on the FSRU will be provided by Covestro Industriepark Brunsbüttel in the form of warm process water. For this purpose Covestro very quickly laid a new warm water pipeline to the Brunsbüttel Elbehafen port.

Together with Uniper and EnBW, RWE is responsible for filling the FSRU with liquefied natural gas. According to current plans, the first LNG cargo will arrive at Brunsbüttel at the end of January 2023 and be unloaded into the FRSU. The cargo from ADNOC (Abu Dhabi National Oil Company) will be shipped from the island of Das, which belongs to the Emirate of Abu Dhabi.

As a centre of technology and industry, Brunsbüttel is an important location, also for future imports of green molecules. In the immediate vicinity, RWE wants to build an import terminal for green ammonia, which – as a liquefied hydrogen derivative – can make an important contribution towards supplying Germany with green hydrogen.

From 2026, around 300,000 tonnes of green ammonia is to be imported and distributed to customers annually via the terminal. German LNG Terminal GmbH plans to build and operate a multi-functional LNG terminal very close by.

As a shareholder, RWE supports a subsequent conversion of the terminal to the import of green molecules.

Hexicon granted permits to connect 7,100 MW of floating wind to the national grid...

Port of Pécem signs MoU for implementation of Green Hydrogen...