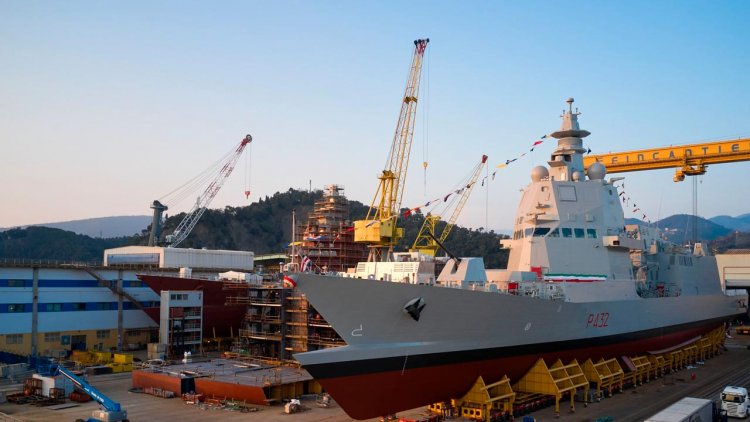 This vessel, third of seven, will be delivered in 2023 and it is part of the renewal plan of the operational lines of the Italian Navy vessels, approved by the Government and Parliament and started in May 2015 (“Naval Act”) under the aegis of OCCAR (Organisation Conjointe de Cooperation sur l’Armement, the international organization for cooperation on arms).

The multipurpose offshore patrol vessel is a highly flexible ship with the capacity to serve multiple functions, ranging from patrol with sea rescue capacity to Civil Protection operations and, in its most highly equipped version, first line fighting vessel. There will be indeed different configurations of combat system: starting from a “soft” version for the patrol task, integrated for self-defence ability, to a “full” one, equipped for a complete defence ability. The vessel is also capable of operating high-speed vessels such as RHIB (Rigid Hull Inflatable Boat) up to 11 meters long through lateral cranes or a hauling ramp located at the far stern.

•133 meters long
•Speed more than 31 knots according to vessel configuration and operational conditions
•171 persons of the crew
•Equipped with a combined diesel, a gas turbine plant (CODAG) and an electric propulsion system
•Capacity to supply drinking water to land
The Multipurpose Offshore Patrol ships will be built at the Integrated Shipyard of Riva Trigoso and Muggiano, with deliveries expected until 2026.

Raimondo Montecuccoli, from Modena, was a general in service within the Austrian Empire. He participated with great success in all the wars fought in Europe – between 1625 and 1675 – by the Habsburg monarchy against the Dutch, Swedes, Turks and French. Initiated to a career in the church, he instead chose the military career with determination, serving the Empire and standing out in several campaigns during the Thirty Years’ War. From 1648, he held a series of very important diplomatic positions in Italy and Europe. At the peak of his career, he became the rank of General Lieutenant of the Empire (1609-1681).

He was a man with a unique culture, a very successful military writer (he was the first to further explore his studies in personnel and logistics), and was mentioned by Ugo Foscolo as the greatest and most learned Italian men at arms.

His name was previously attributed to a light cruiser of the same-named class. Unit characterized by the reputation of a lucky ship, in the headlines since 1937, when she was sent, with only twenty-four hours notice, to China. Protagonist of the battle of Pantelleria, on June 15, 1942, the vessel resulted in the loss of the destroyer “Bedouin”, the “Kentucky” tank, as well as in the damage to the cruiser “Cairo”, the destroyers “Ithuriel” and “Partridge”, and the minesweeper “Hebe”.