PIRIOU have signed a contract with TOWT for the design studies and the construction of an 81-metre sailing cargo ship whose goods capacity will be 1,100 tonnes in a single ocean crossing. 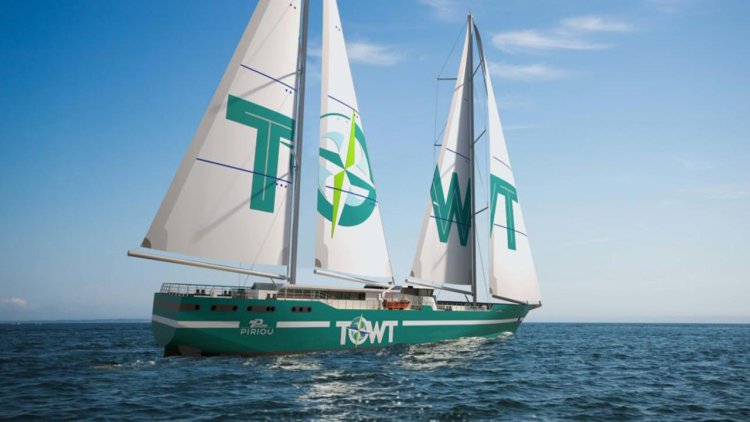 After the design studies phase, the ship construction will take 18 months. This unit will be outfitted in Concarneau and the launch is planned for summer 2023.

The ship is designed for 320 days at sea per year. Navigation is principally sail-powered, but the ship also has a hybrid power mode, with one or two engines operating, at different levels of power. The ship will be designed and built with wind as the principal power source, with a sail rigging spread over two masts.

In addition to its wind propulsion, it is equipped with of two turbocharged 4-stroke marine diesel engines. On the bridge, there will be a single command station and its ergonomics will allow the officer of the watch to carry out all the commands and course adjustment operations, excluding manoeuvres, alone.

"A few weeks after announcing the signing of a contract for the construction of Jean-Louis Etienne's sailboat “Septième Continent”, Piriou is proving that the shipyard is at the forefront of innovation regarding the progress of sailing technologies and the decarbonization of maritime transport".

"Today, TOWT is going further by ordering a ship from Piriou that will make it possible to massify its environmental impact by transporting up to 20,000 tonnes of goods per year by sail power. The sailing cargo ship, which will be completed by PIRIOU Shipyard in 2023, will make it possible to reduce CO2 emissions by more than 90% and to economise 20 g of CO2 per tonne transported per kilometre. It will therefore save 3,000 tonnes of CO2 per year. In addition to the carbon savings, principally wind-powered propulsion will allow a significant reduction in the air pollution caused by the heavy fuel oil generally used by merchant ships."

Fincantieri will build a fourth ship for North Star