The vessel is equipped with separate cargo tanks designed to carry LPG and LAG at the same time. 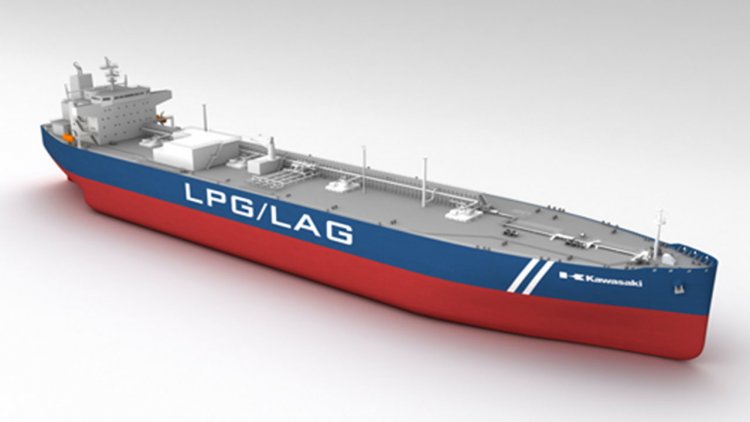 The vessel is equipped with separate cargo tanks designed to carry LPG and LAG at the same time. This contract represents the 72nd LPG carrier and 9th LPG-fueled LPG carrier to be constructed by Kawasaki, and their second LPG/LAG carrier. Kawasaki plans to complete the construction of the vessel at its Sakaide Works in 2023.

The advantage of this dual-purpose vessel is its capability to simultaneously carry LPG, which is already used as a low-carbon energy source, and LAG, a new fuel contributing to the establishment of a decarbonized society. Another feature is the greater capacity of the cargo tanks as compared to conventional carriers, which was achieved without significantly changing the vessel’s length, breadth, or other main specifications.

Fueled by low-sulfur fuel oil and LPG (which significantly reduces the emission volumes of sulfur oxides [SOx], CO2, and other pollutants in the exhaust gases as compared to marine fuel oil), the vessel meets SOx emission standards set by the International Maritime Organization (IMO), as well as the IMO’s Energy Efficiency Design Index (EEDI) Phase 3 regulations, which are scheduled to adopt stricter CO2 emission standards in 2022.

To meet environmental standards being tightened globally, and to implement action plans set forth in the Sustainable Development Goals (SDGs) adopted by the United Nations and other initiatives, Kawasaki plans to develop and build more LPG-fueled LPG carriers and other commercial vessels that meet environmental standards, as well as to develop other eco-friendly marine technologies, to contribute to the establishment of a low-carbon/decarbonized society. These products include vessels for transporting liquefied hydrogen, considered to be the next-generation energy source.

Crowley will build and operate the first fully electric...