‘HMM Algeciras’ is the first of twelve 24,000 TEU-class vessels scheduled to be sequentially delivered until September, 2020. 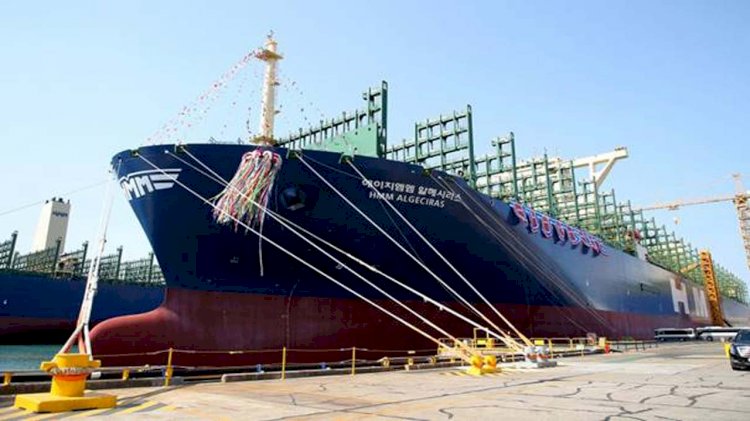 About 160 distinguished persons attended the ceremony. First Lady Kim Jung-sook served as godmother who cut the ropes to officially name the ship during the ceremony.

‘HMM Algeciras’ is the first of twelve 24,000 TEU-class vessels scheduled to be sequentially delivered until September, 2020. In September 2018, HMM signed a formal contract for its twenty eco-friendly mega container vessels with three shipyards – DSME, HHI (Hyundai Heavy Industries) and SHI (Samsung Heavy Industries) in an effort to take proactive actions towards market change as well as form a sustainable profit-generating structure.

DSME and SHI build seven and five 24,000 TEU-class containerships, respectively, which are expected for delivery until September, 2020. HHI constructs eight 16,000 TEU-class containerships to be delivered from the second quarter of 2021. HMM plans to enhance its environmental capabilities by operating newly-launched twenty containerships. The vessels are basically equipped with a scrubber system in preparation for IMO 2020 environmental regulation. Optimised hull design and highly-efficient engine are also expected to improve energy efficiency and reduce carbon emissions.

Moon Jae-in, President of the Republic of Korea, says:

“For me, it is very meaningful that HMM takes delivery of the most technologically advanced containership in this difficult time. I would like to celebrate it and hope that HMM continues to secure a competitive advantage as a Korean national flagship carrier.”

“HMM will strive to expand its presence in the global shipping industry based on optimised fleet management and new cooperation with THE Alliance.”