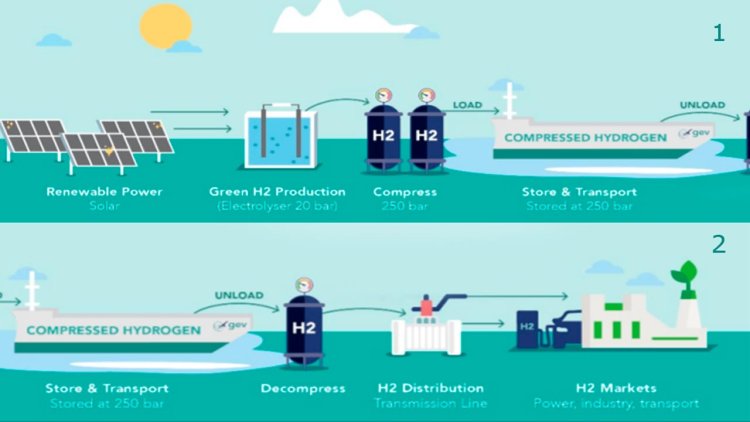 GEV to develop a green hydrogen export project located on the Tiwi Islands, Northern Territory, with a phased capacity up to 2.8 GW (the Tiwi Hydrogen Project), producing up to 100,000 tonnes per annum of green hydrogen for export into the Asia-Pacific region.

Selection of the Tiwi Islands location provides a brownfield site that can reduce development time and cost, as well as access to one of the closest Australian ports (owned by AusGroup Limited’s NT Port and Marine) to the future demand markets in the Asia-Pacific region.

The integration of GEV’s innovative compressed hydrogen shipping solution enables a phased development and construction timeframe, thereby benefiting from the continued decline of the capital and operating costs for solar generation, electrolysers and shipping.

The Tiwi Hydrogen Project has the support of key stakeholders, including the Tiwi Land Council, the Munupi Landowners, NT Port and Marine and the Northern Territory Government.

Development milestones of the Tiwi Hydrogen Project will run in parallel to GEV's ship engineering and class approval program, with a financial investment decision targeted for 2023 for the initial phase being 0.5 GW, allowing first hydrogen export to commence in 2026, subject to all commercial and regulatory approvals and customer offtake.

“The strategic rationale for GEV to develop a landmark upstream renewable energy and green hydrogen production project is to demonstrate the simplicity and efficiency of using compression for a pipe-to-pipe green hydrogen supply chain and to provide greater certainty in the commercialisation of our shipping solution. This project can transition GEV from a midstream service provider to an innovative hydrogen company."

“With our world-class solar resources and our proximity to key export markets, the Northern Territory is an ideal place to generate renewable hydrogen to meet the future demand within our region.”