The final tug, H -13 Przemko, was undergoing harbour acceptance tests in April following the delivery of the fifth vessel, H-3 Leszko, in February. 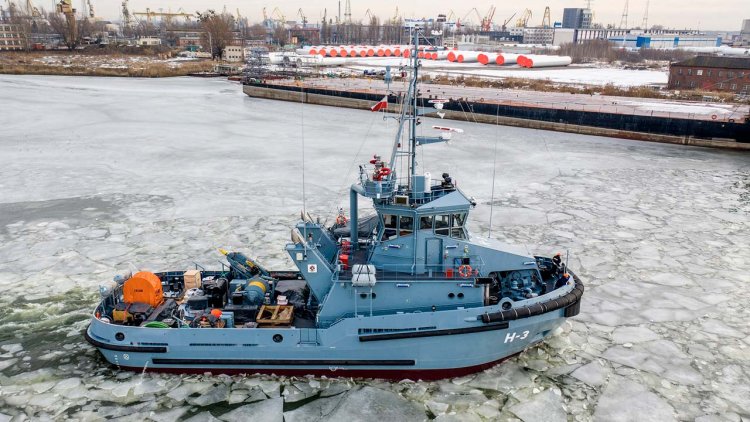 A new series of Polish Navy tugs has been installed with Evac´s marine growth prevention systems to ensure engine cooling system efficiency and reduce maintenance costs throughout their operational lives.

Evac has supplied marine growth prevention systems (MGPS) to protect Blokland box coolers which have been installed on a series of six tugs for the Polish Navy, built by Remontowa Shipbuilding in Gdansk.

The final tug, H -13 Przemko, was undergoing harbour acceptance tests in April following the delivery of the fifth vessel, H-3 Leszko, in February.

The tugs have been built as part of the Polish Navy’s B860 programme and are designed for towing ships as well as activities related to technical evacuation, support of rescue operations and the neutralisation of pollution along the Polish coast. As ice class vessels they will be able to operate in severe ice conditions in conjunction with icebreakers.

Evac has supplied seachest mounted Cathelco MGPS systems which protect box coolers made by Blokland Non Ferro against the formation of marine growth. Commissioning of the latest systems was undertaken by engineers from Marine Center, Evac’s agent in Gdansk.

“The system has a long record of effectiveness in preventing marine growth on the heat transfer tubes of box coolers. From the customer’s point of view, this helps to achieve the aim of greater sustainability by improving fuel economy and reducing the need for unscheduled maintenance.”

The MGPS system consists of pairs and copper and aluminium anodes which are mounted in the seachests and fed with an electrical current. In operation, the copper anodes produce ions which are carried by the flow of seawater and create an environment where the larvae of barnacles and mussels do not settle or grow.

The concentrations of copper are around two parts per billion and have no effect on the wider marine environment after discharge.

“Marine growth in box coolers and seawater pipework can be costly and time consuming to remove, but through the protection provided by the MGPS systems these maintenance costs are eliminated whilst ensuring that the box coolers operate with optimum effectiveness.”

Cathelco have worked in partnership with Blokland Non-Ferro, the Dutch manufacturers of box coolers to develop systems which overcome the problem of bio-fouling. This has encompassed the design of integral MGPS systems for box coolers as well as those served by seachest anode installations.