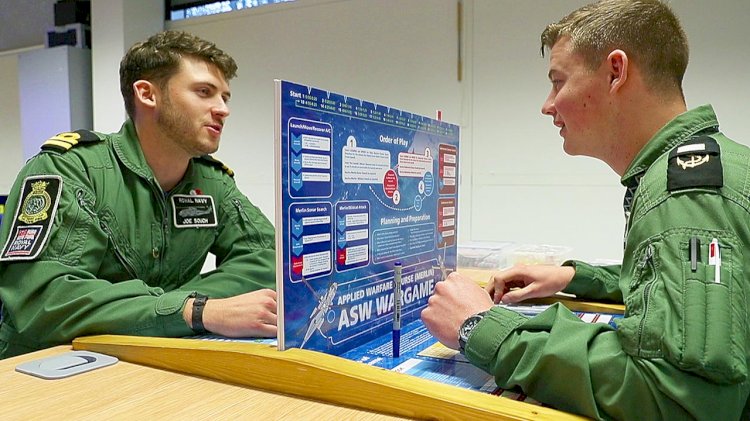 Instructors at British Royal Naval Air Station Culdrose have designed a set of bespoke board games based around hunting submarines.

They are now being used to train the next batch of observers and aircrewman who will have to use those skills for real.

Ed Oates, one of the brains behind the project, said:

“This is not about playing games. This is about learning by doing. The idea is that you take a game that people already know about and enjoy, and use that to teach the basics of anti-submarine warfare.”

The key thing about the games is that you have to get the science right, because that is the reality.

Mr Oates, is a former lieutenant commander and served as an observer in both Sea King and Merlin helicopters. Working with him is Gavin ‘Mini’ Cooper, who is a retired petty officer having served as a helicopter aircrewman.

Their Anti-Submarine Warfare game is loosely based on the children’s classic Battleships, while a second helicopter search game, called Pingers, is more similar to the Asian strategy game Go. A third card game teaches Nato codewords in an elaborate version of Snap.

The pair are also developing another card game based on the mechanics of poker - although without any gambling – where the cards list tactical manoeuvres and the chips represent ships and helicopters.

“We already do work with the trainees in the classroom and in our simulators. This is something extra where we can pull out the key points we want to teach and do that using a game. This is all about a long tradition of wargaming in the military.

Take our Anti-Submarine Warfare game for example.  Yes, it’s based on the game Battleships, but this uses the relevant up-to-date anti-submarine tactics. It follows the same 7-step NATO and Royal Navy planning process, analysis and search grids. The players take it in turns, then they debrief and switch over. Whether you playing as the aircrew or playing as the submariner, it allows you to understand the whole picture from both sides. The key thing about the games is that you have to get the science right, because that is the reality. You’ve got to do your maths and you’ve got to make sure your timeframe and the game mechanics are in sync with the maths.

The artistic part of designing the game is about making it fun, because it has to be enjoyable too as that is how the human brain works and that is an effective way to learn. These games could even be expanded to bring in multiple players or whole teams of players in different rooms representing the various ranks on the ships.”

The pair have now had ten sets of the Anti-Submarine Warfare and Pingers games made by design staff at Culdrose and will use them as an additional teaching tool on the Applied Warfare Course (Merlin).

"These new war games are a fantastic addition to the Merlin training course and introduce the basics of anti-submarine warfare to the aircrew in a really innovative format. I am sure the trainees will enjoy getting to grips with these games as part of all of their training here at Culdrose in the classrooms, simulators and in real aircraft. I can’t praise highly enough the work of Ed Oates and Gavin Cooper, who I know have put so much effort into producing these games. Their enthusiasm and commitment is a credit to Babcock and the Royal Navy.”

Opinion: The digital transition is well underway, but there is still untapped potential