The bunkering operation was conducted by Gasum’s LNG BSV Kairos in the port of Bremerhaven. 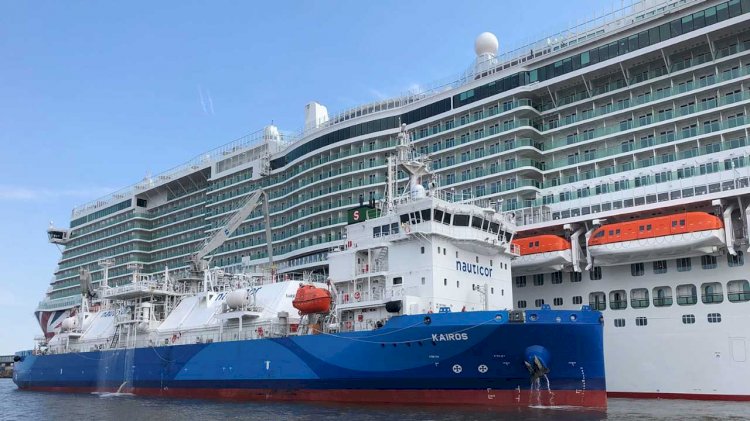 On June 18th, Hamburg based LNG supplier Nauticor, a subsidiary of the Nordic energy company Gasum, has conducted the initial ship-to-ship LNG bunkering operation for the newbuild cruise ship Iona.

Iona is one of the world’s first LNG-fuelled cruise ships. The vessel is in the final outfitting phase at the Meyer Werft shipyard. After the outfitting and sea trials has been done, the vessel will join the fleet of P&O Cruises. The vessel is part of a series of vessels for the Carnival Corporation with their different brands.

LNG is the cleanest available marine fuel, and it’s rapidly becoming the most commonly used alternative to traditional fuels. The use of LNG significantly improves local air quality as well as reducing greenhouse gas emissions by at least 20%, and it meets all the current and forthcoming regulations set out by the International Maritime Organisation and the EU. Furthermore, LNG is suitable for all vessel types.

Gasum’s bunker vessel Kairos started operating in 2019 and is mainly operating in the North Sea and the Baltic Sea. The vessel became a part of Gasum’s fleet of LNG BSV when the company took over Nauticor’s marine bunkering business in April 2020.

“The bunkering operation was a great success because of a close cooperation between our teams onshore and at sea and the shipyard. Kairos has proven again that the vessel is a valuable asset for us in our aim to develop the Northern European market for LNG as maritime fuel and we are looking forward to reaching more milestones on our way to make transport more sustainable.”

Equinor: TechnipFMC awarded assignments worth up to NOK 1.8 billion

Terminal continues to modernize its operations to meet the growing trade demand...