Russia has used the United Nations Convention on the Law of the Sea for its own economic and geopolitical interests. One Russian law requires all vessels passing through the Northern Sea Route to be piloted by Russians. The heavy regulation is one among many reasons why major shipping companies often use the Suez and Panama canals—longer, but cheaper and easier, trade routes. 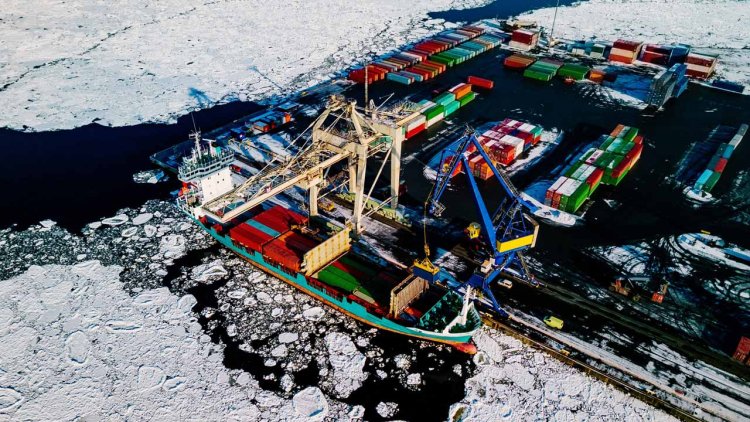 With climate change rapidly warming the world's oceans, the future of the Arctic Ocean looks grim. Climate models show that parts of the Arctic that were once covered in ice year-round are warming so quickly that they will be reliably ice-free for months on end in as few as two decades. The Arctic's changing climate will endanger countless species that thrive in sub-zero temperatures, scientists say.

Another critical consequence of melting ice in the Arctic? The potential for shorter, more eco-friendly maritime trade routes that bypass the Russian-controlled Northern Sea Route.

In a new study, a pair of climate scientists at Brown University worked with a legal scholar at the University of Maine School of Law to predict how Arctic Ocean ice melt could affect the regulation of shipping routes over the next few decades. They projected that by 2065, the Arctic's navigability will increase so greatly that it could yield new trade routes in international waters—not only reducing the shipping industry's carbon footprint but also weakening Russia's control over trade in the Arctic.

The study was published in the Proceedings of the National Academy of Sciences.

Amanda Lynch, the study's lead author and a professor of Earth, environmental and planetary sciences at Brown, said:

"There's no scenario in which melting ice in the Arctic is good news. But the unfortunate reality is that the ice is already retreating, these routes are opening up, and we need to start thinking critically about the legal, environmental and geopolitical implications."

Lynch, who has studied climate change in the Arctic for nearly 30 years, said that as a first step, she worked with Xueke Li, a postdoctoral research associate at the Institute at Brown for Environment and Society, to model four navigation scenarios based on four likely outcomes of global actions to halt climate change in the coming years. Their projections showed that unless global leaders successfully constrain warming to 1.5 degrees Celsius over the next 43 years, climate change will likely open up several new routes through international waters by the middle of this century.

According to Charles Norchi—director of the Center for Oceans and Coastal Law at Maine Law, a visiting scholar at Brown's Watson Institute for International and Public Affairs, and one of the study's co-authors—those changes could have major implications for world trade and global politics.

Norchi explained that since 1982, the United Nations Convention on the Law of the Sea has given Arctic coastal states enhanced authority over primary shipping routes. Article 234 of the convention states that in the name of "the prevention, reduction and control of marine pollution from vessels," countries whose coastlines are near Arctic shipping routes have the ability to regulate the route's maritime traffic, so long as the area remains ice-covered for the majority of the year.

Norchi said that for decades, Russia has used Article 234 for its own economic and geopolitical interests. One Russian law requires all vessels passing through the Northern Sea Route to be piloted by Russians. The country also requires that passing vessels pay tolls and provide advance notice of their plans to use the route. The heavy regulation is one among many reasons why major shipping companies often bypass the route's heavy regulations and high costs and instead use the Suez and Panama canals—longer, but cheaper and easier, trade routes. 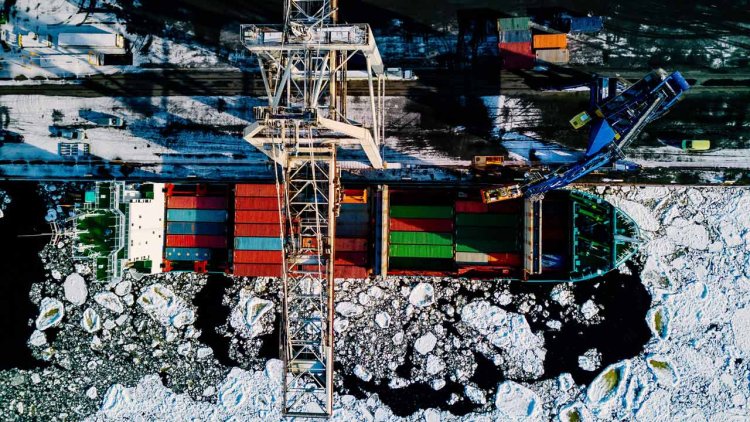 But as the ice near Russia's northern coast begins to melt, Norchi said, so will the country's grip on shipping through the Arctic Ocean.

"The Russians will, I'm sure, continue to invoke Article 234, which they will attempt to back up with their might. But they will be challenged by the international community, because Article 234 will cease to be applicable if there's no ice covered-area for most of the year. Not only that, but with melting ice, shipping will move out of Russian territorial waters and into international waters. If that happens, Russia can't do much, because the outcome is driven by climate change and shipping economics."

According to Lynch, previous studies have shown that Arctic routes are 30% to 50% shorter than the Suez Canal and Panama Canal routes, with transit time reduced by an estimated 14 to 20 days. That means that if international Arctic waters warm enough to open up new pathways, shipping companies could reduce their greenhouse gas emissions by about 24% while also saving money and time.

"These potential new Arctic routes are a useful thing to consider when you recall the moment when the Ever Given ship was stranded in the Suez Canal, blocking an important shipping route for several weeks. Diversifying trade routes—especially considering new routes that can't be blocked, because they're not canals—gives the global shipping infrastructure a lot more resiliency."

And it's better to ask questions about the future of shipping now, Lynch said, rather than later, given how long it can take to establish international laws. (For context, she said, it took 10 years for world governments to negotiate the Convention on the Law of the Sea.) Lynch hopes that kicking off the conversation on the Arctic's trade future with well-researched scholarship might help world leaders make informed decisions about protecting the Earth's climate from future harm.

"Flagging these coming changes now could help prevent them from emerging as a crisis that has to be resolved rapidly, which almost never turns out well. To actually craft international agreements with some forethought and deliberation is certainly a better way to go."

Wärtsilä and Stena to build the world’s largest hybrid vessels