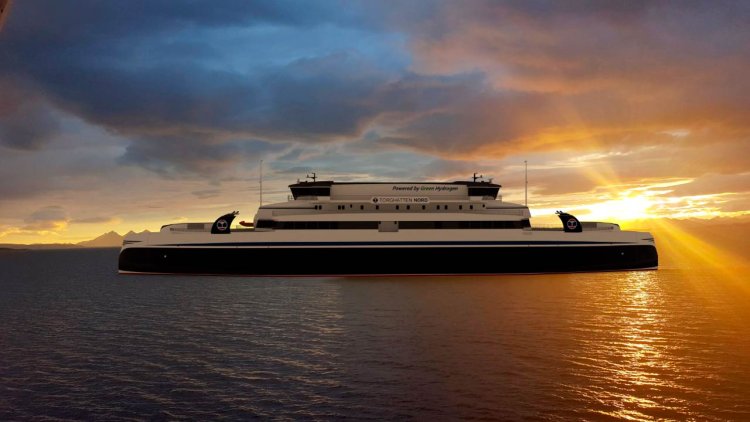 The two vessels, designed by Norwegian Ship Design, will use a minimum of 85% ‘green hydrogen’ based fuel, helping to reduce CO2-emissions on the route by 26,500 tons each year. The two main components of the hydrogen system on board are the hydrogen storage part, feeding hydrogen to fuel cells and the fuel cells themselves, providing electric power for the propulsion and all other consumers on board.  The ferries are scheduled to enter operation in October 2025.

LR awarded the AiP following the completion of a comprehensive and constructive risk-based HAZID certification. The project signifies an important step in the maritime energy transition as the industry moves towards sustainable fuel sources.

“We are pleased to award Torghatten Nord approval in principle based on an extensive risk analysis of the concept and technology. Lloyd’s Register has been present in Norway for 150 years, and we see this as a landmark project that will drive forward the use of hydrogen as a safe and sustainable future fuel.”

“We are pleased with the AiP and we are proud to work with the leading experts on hydrogen as ship fuel. To develop hydrogen ferries on such a long and weather-exposed route is a world-class climate project with great importance for the entire maritime sector and not least Bodø and Lofoten.”

“The boats that will be developed, built and operated are unmatched anywhere else in the world. We have to think anew and find completely new solutions compared to what we know today as ordinary ships. An impressive job has been done by both Lloyd's Register and Torghatten Nord to get this Approval in Principle in place.

We have evaluated a number of different solutions for the onboard hydrogen system. and has come up with a unique and safe concept that takes hydrogen's properties into account. What we are developing now will likely set the standard for an entire class of passenger ships powered by hydrogen.”

The AiP builds on LR’s zero-carbon projects in the region, including the recent Approval in Principle for the hydrogen-fuelled bulk carrier, With Orca, which was granted in March 2022.

Høglund signs contract with Halliburton AS to deliver of...