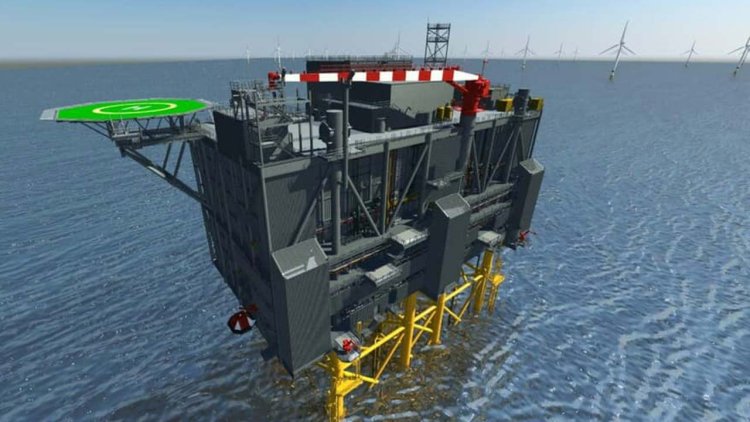 KenzFigee signed a contract with Iv-Offshore & Energy to deliver an electric hydraulic Ram Luffing offshore crane for installation on the state-of-the-art HVDC offshore converter platform for Sofia Offshore Wind Farm, to be sited on Dogger Bank in the North Sea.

The heavy duty 3,000 type Ram Luffing crane is especially suited for harsh North Sea offshore operations. With its compact and robust design coupled with a limited number of moving parts, it is an ideal low maintenance offshore crane. The crane is equipped with a 40-metre long box boom which enables personnel handling and supply boat lifts of up to Hs-5m, according EN13852-1, and platform lifts with safe working loads from 19 to 25 tonne.

The Ram Luffing crane will be built, assembled and tested at KenzFigee facility in Zaandam, the Netherlands. In the first quarter of 2022, it will be shipped to Batam, Indonesia where Sembcorp Marine will install it on the HVDC (High Voltage Direct Current) offshore converter platform being fabricated for Sofia Offshore Wind Farm.

The 1,400 MW Sofia Offshore Wind Farm, consisting of 100 wind turbines, will generate enough energy to power 1.2 million UK homes and will be one of the largest offshore wind farms in the world when completed. Located 195 km off the North East coastline of the United Kingdom, it will also be one of the farthest from shore.

“We are proud to be able to contribute to safe and efficient operations on one of the world’s largest offshore wind farms, the Sofia Offshore Wind Farm in the UK sector. It’s a pleasure to be working again with Iv-Offshore & Energy on this great project. This new contract award by Iv-Offshore & Energy reflects the mutual trust and confidence between both companies, and validates the reliability of our products, particularly the Ram Luffing crane as a proven design with an installed base of over 100 cranes worldwide.”

Northern lakes warming six times faster in the past 25 years