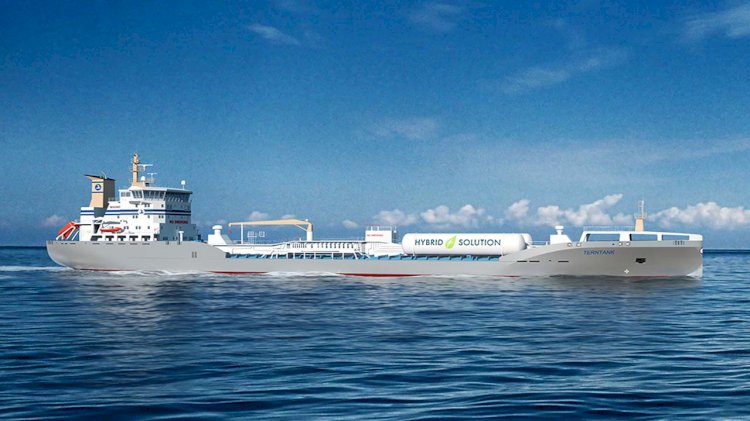 This is a further development of Terntank's AVIC series. The two vessels on 15,000 dwt have been ordered from CMJL, formerly AVIC Dingheng Shipbuilding, under the project name AVIC SERIES 2.0.

"We saw a will and a potential in the shipyard when we got there in 2013. Having the first four vessels Ternsund, Ternfjord, Tern Sea and Tern Ocean in operation for three, four years, we found that our customers, crew and the owners is very satisfied with that shipyard.

Our goal of reducing carbon dioxide emissions by 40% through reduced fuel consumption and LNG operation was achieved through the first series. Now we continue our journey towards fossil-free operations with hybrid technology and over time also by biofuels."

In addition to dual fuel machinery that can be run on liquid biogas (LBG) or natural gas (LNG), the newbuilding’s get a hybrid battery system. This way the vessels can eliminate the use of auxiliary engines in arrival and departure from the port.

In addition, the vessels will be equipped with shore power connections that will eliminate the emissions in port, which are generated from the auxiliary machines.

"This is both costly and technically complicated because the connection must be carried out in an explosion area."

The vessels will also be equipped with new digital technology. The vessels are designed by Kongsberg (former Rolls-Royce Commercial Marine) in collaboration with Terntank.

The two newbuilding’s will be put into service on the Baltic Sea and the North Sea during 2021. The first, AD077, are going to be delivered in November 2021 and the second, AD0078, will be delivered in February 2022.

CNCo streamlines collection and distribution of files across its fleet

Shell signs an agreement with Kongsberg Digital for digital...

Shell has now signed an enterprise agreement with Kongsberg Digital for digital...

Operator Aker BP and partners report that production has started from the first...

NCL to set sail for all seven continents including Antarctica

MarCoPay Inc. realizes world's first onboard use of digital...