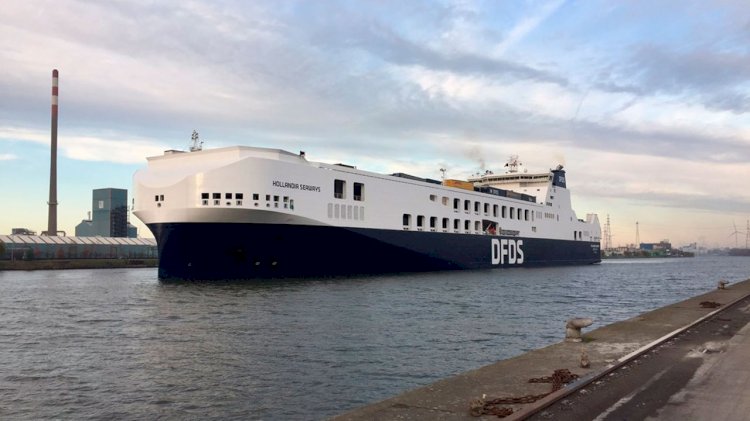 DFDS is now also using the new ro-ro ship 'Hollandia Seaways' on the line between Ghent and Gothenburg in Sweden. On Thursday 5 December, DFDS's largest ship was officially inaugurated at the Mercatordok Multimodal Terminal in Ghent, North Sea Port.

The naming ceremony for the Hollandia Seaways cargo ferry was held in Gothenburg on Friday. The ship can carry 450 trailers, representing a cargo capacity of 6,700 line metres. It has a length of 237.4 metres. With an 'extra floor' for trailers, this new ship will immediately catch the eye when in the lock in Terneuzen or on the Ghent-Terneuzen Canal. The ferry is not only larger than the three DFDS ships which currently sail between Ghent and Gothenburg six times a week, it will be by far the largest ship in the entire DFDS fleet. This larger vessel will take the place of one of the three existing ships on the route. As a result, capacity will increase by some 600 trailers per week.

The Hollandia Seaways features a unique stern ramp system: it has three independent stern ramps which allow trailers to be loaded and unloaded at the same time, significantly shortening the time in port. So even though this ship is much larger, the loading and unloading time remains eight hours but now for 450 trailers instead of 290. The mooring infrastructure and capacity of the gates at the terminal have been adapted for this purpose.

Due to the vessel's large cargo capacity, energy consumption per transported trailer will decrease significantly. The ferry is also equipped with a system that 'scrubs' the exhaust gases in order to reduce sulphur oxide emissions. In addition, the ship can be connected to shore power in the port.

Danish shipping company DFDS is preparing for future growth by having six mega freight ferries (roll-on-roll-off) built at the Jinling Shipyard in China. The first two ships were delivered during the course of 2019 and have been taken into service between Turkey and the EU to meet the growing demand for shipping capacity from logistics companies. The cargo ferry Hollandia Seaways is the third ship in this series and is being used on the North Sea.

Wärtsilä and CBO to partner in Latin America’s first hybrid...