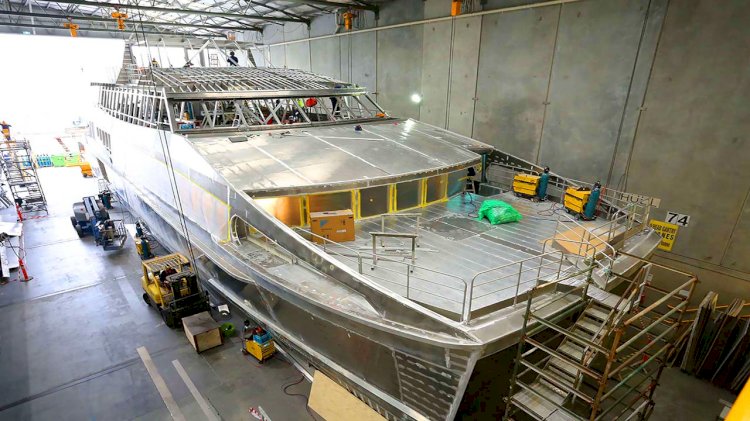 Under construction at Richardson Devine Marine, the vessel is due to launch by the end of the year. It will draw on the many successful features of World Heritage Cruises’ current Incat Crowther 35, Harbour Master. This vessel has garnered acclaim for its efficient and stable platform, leading to expressions of interest in purchasing the vessel.

WHC saw this as an opportunity to take their immense knowledge of the operation and build a new vessel that takes the best of Harbour Master and improves the package in key areas. The competitive operating environment of Tasmania’s World Heritage-listed Gordon River means that the bulk of the improvements fall under the banner of passenger amenity. Primarily, the vessel is 1m wider to provide greater space, more aisles and smaller groups of seats.

A bar has been added to the mid-deck, linked to the main deck food preparation space by a dumb waiter. One of the highlights of WHC’s tours is the gourmet lunch featuring local produce. To further enhance the offering, main deck service spaces have been expanded, with the bar and food preparation now separated and a larger serving island installed.

The cabin will be lighter and brighter with deep windows and the absence of the main stair tower, which has been moved aft amongst other obstructions such as bathrooms. On-board amenity will also be boosted by wi-fi and multiple device charging options.

The new vessel will be powered by quad Scania DI16 076M main engines. These will drive a quartet of Doen DJ200 water jets. The quad Scania package has proven itself in Harbour Master, and the addition of jets will provide an efficient, reliable package with inherent redundancy. The vessel will operate at 25 knots.

Plans are well progressed to optimise Harbour Master for its new owners to operate to Rottnest Island, with Incat Crowther’s expertise in vessel support coming to the fore. The new owners will take delivery of Harbour Master upon completion of the new vessel.

Diesel electric battery hybrid vessels: is it for every vessel?

The tug, which will operate in Singapore harbor, has been ordered by Sembcorp Marine...

Fugro has been selected to chart the waters of South Australia’s Gulf St Vincent...

It has been several months of work in order to meet deadlines and deliver the last...

Nova module ready for sail away to Neptune Energy’s Gjøa...

Neptune Energy has announced the load out of the 740-tonne topside module for the...