Valenciaport activates the photovoltaic plant of the Port of Gandia 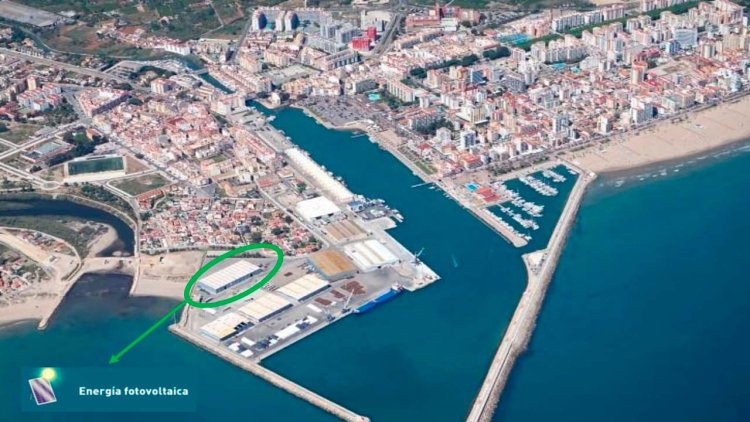 The Port Authority of Valencia (PAV) has put out to tender the installation and maintenance of a solar energy plant to be in shed 4 of the Port of Gandia with a power of 705 Kwp and which will make the Gandia site the first European port to be energy self-sufficient.

The PAV is to install a photovoltaic energy plant for self-consumption, whose solar energy collectors will be located on the roof of shed 4 of the Port of Gandia, and electrical energy storage equipment will also be installed. Once awarded, the construction of the solar power plant will take 8 months and the maintenance period will be 52 months.

This project is financed by the Next Generation funds of the European Union and the Recovery, Transformation and Resilience Plan of the Spanish Government.

In addition to this photovoltaic plant in the Port of Gandia, Valenciaport is planning to install two other plants in the Port of Valencia, one of them in the Valencia Terminal Europa car silo, and the other between the Príncipe Felipe dock and the Club Náutico de València.

This initiative is part of the objective set by Valenciaport to achieve the goal of zero emissions by 2030, the reduction of dependence on fossil fuels and energy autonomy. To this end, investments will be made to promote renewable energies from hydrogen, photovoltaic (in Gandia and Valencia) and wind power, the installation of two electrical substations in the Port of Valencia, or the use of alternative fuels such as LNG, among other actions.

The president of the PAV, Aurelio Martínez, emphasised that “this is another step towards our Valenciaport 2030 objective, zero emissions. In Valenciaport we act with facts and concrete projects that show the commitment of the PAV and the port community to the fight against climate change and decarbonisation”. Martínez underlined that “the Port Authority is going to allocate 130 million euros, to which the effect of private investments will have to be added, in sustainability actions”.

Along these lines, the head of Valenciaport recalled other projects such as “the installation of the hydrogen plant within the framework of the H2Ports project which will position us as the first port in Europe in the use of hydrogen, the project for a wind farm in the Port of Valencia or the construction of two electrical substations in the Valencia area, one of which is already under construction, which will allow ships docking to connect to the port’s electrical network and switch off their engines”.

Shoreham Port one step closer to being converted into a...

Drones will be used to support control in the Antwerp port...