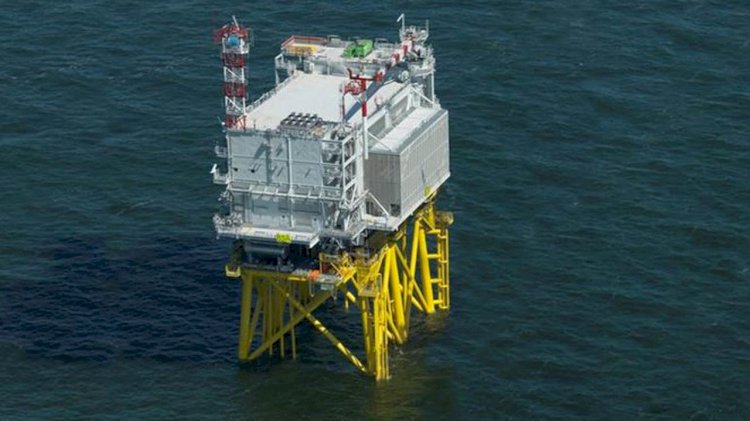 The 700 MW offshore station is expected to be operational according to schedule on 1 September. From that point onwards, the wind farm being constructed approximately 22 km from the coast of the Province of Zeeland by the Blauwwind consortium will be plugged into this power socket. The electricity generated by the offshore Borssele III, IV and V wind farm will subsequently be brought onshore to the high voltage substation in Borssele by means of two 67-kilometre long cables. The platform was built by HSM Offshore in Schiedam (NL).

“With this platform, the offshore grid that TenneT is building in the Dutch North Sea is definitively taking shape. Borssele Beta is the second offshore grid connection built by TenneT. Over the coming eight years we will build a new offshore connection every year. I am proud that we are able to make such a significant contribution to the energy transition in which offshore wind energy plays a crucial role.”

“The construction of the Dutch wind farms in the North Sea is well on track. This is in part due to the coordinated construction of an offshore electricity grid by TenneT. The second ‘offshore power socket’ will transport approximately 2.5% of the electricity used in the Netherlands from the wind farm to the mainland.”

On the 22th of  March, the pontoon carrying the topside will sail through the New Waterway in the direction of the Borssele III and IV wind area. At this site, a crane vessel will place the topside on top of the substructure (jacket).
The superstructure (topside) consists of three interior levels (main deck, utility deck, control deck) and an outer deck (roof deck). The topside is 25 metres high, 58 metres long and 32 metres wide. The topside weighs 3,650 tonnes.

The Borssele Beta transformer platform also contains a monitoring station with various monitoring systems, such as nautical radars, meteorological systems (for wind, precipitation, clouds and temperature) and ecological monitoring systems for birds and bats. A similar Maritime Information Provision Service Point (MIVSP) is being installed on every offshore transformer platform by the Directorate-General for Public Works and Water Management (Rijkswaterstaat) in cooperation with TenneT. These monitoring stations will be used to collect unique and detailed information along the entire Dutch coastal area. In addition to the Coastguard, other organisations, such as port authorities, universities, the Dutch Meteorological Office (KNMI), and wind farm operators will make use of this data.

The Borssele III and IV wind farms will have a total capacity of 700 megawatts (MW). This corresponds to the electricity generation requirements of approximately one million households. The power will be connected through TenneT’s offshore Borssele Beta connection to the Borssele high voltage substation, from which it will be distributed to the onshore grid. TenneT will connect the wind farms off the coast of the Zeeland, Zuid-Holland and Noord-Holland provinces and the area above the West Frisian Islands the same way. Eight times over, TenneT will use the same 700 MW transformer platforms that are located close to the wind farms, and the same type of cable connection to the coast. This standardisation will allow these projects to be completed more efficiently, more quickly and more economically.