DEME and Van Oord have accomplished the deepening of the Świnoujście-Szczecin Fairway, one of the most important dredging projects in Poland’s history. 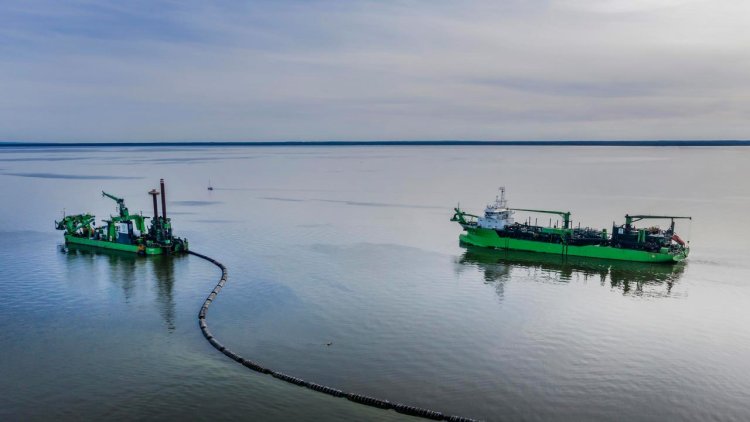 The joint venture partners celebrated the official opening of the 65 km Fairway on May 9.

Providing access from the Baltic Sea, the Fairway runs between the city of Świnoujście and the Port of Szczecin. With more approximately 24 million m3 of material dredged, the channel has been deepened by 2 m to -12.5 m, which enables the Port of Szczecin to handle the next generation of vessels.

Despite exceptional challenges, including carrying out most of the work during the pandemic and the presence of large amounts of unexploded ordnance, as well as thick ice in winter, the ambitious Design & Build project was completed on time, highlighting the tremendous efforts of the JV team. DEME’s cutter suction dredger ‘Amazone’ even mobilised at the very beginning of the pandemic, although there were lockdowns in both Poland and Belgium. When the project was nearing completion, it was hit by two heavy storms leading to a fresh build-up of sedimentation, which meant the team had to remobilise again to dredge to the target depth.

Ten main dredging units were deployed along the Fairway, including DEME’s dual fuel trailing suction hopper dredger ‘Scheldt River’, DEME’s ‘Meuse River’ and Van Oord’s ‘Vox Amalia’ and ‘HAM317’. These next generation dredgers are all able to pump material over long distances – up to 8 km in this case - without the need of a booster station.

This mammoth project also included the construction of two artificial islands in the lagoon, which in line with the JV partners’ sustainable, circular-economy solutions, are created from dredged material. One of the islands is established as a new nature habitat above and below the waterline and is attracting a diverse range of birds, even rare species that are on the EU’s endangered list. The rock revetments below the water are also proving popular with marine life. Additionally, over 9,000 trees and bushes have been planted as part of the greenery works to create new habitats for the wildlife.

Other green initiatives included DEME’s TSHD ‘Scheldt River’ operating on LNG during the project, hybrid earthmoving machinery, and the use of solar panels at the Trzebiez marina.

In the largest UXO campaign in DEME and Van Oord’s history, the JV managed to successfully clean the channel, which had been subject to heavy bombardments in World War Two. An unexploded, five-tonne ‘Tallboy’ bomb was amongst the discoveries. After a year of research and preparations, the Tallboy was safely detonated in situ by the Polish Navy.

As well as the deepening works and the new islands, the JV partners carried out shore protection works, underwater reinforcements, installed cables and navigational aids.

“This was DEME’s first major project in Poland and indeed, the first Design & Build dredging project in the country and it had to be carried out while adhering to stringent safety and environmental standards. However, we managed to successfully achieve this complex project although we faced unprecedented challenges - the pandemic, a large-scale UXO campaign, severe winter storms - and we did this by working closely together with our JV partner.”

Heerema selected for Strategic Supplier Agreement with Equinor and bp