Following an underwater volcano eruption on Saturday, Tonga has suffered significant damage and is blanketed in ash that closed runways and threatens water supplies. 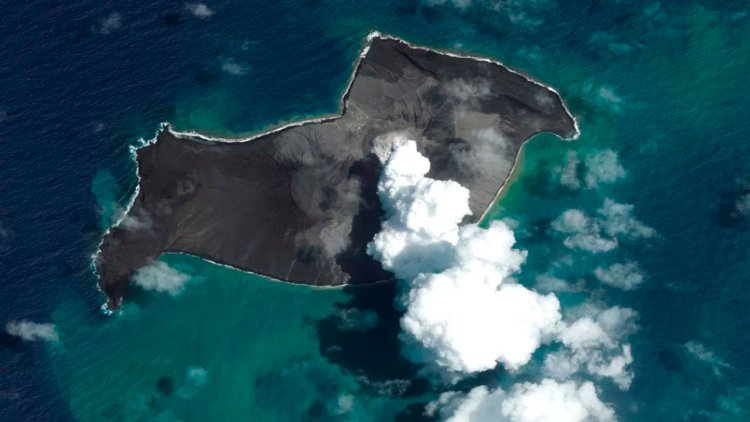 Cornell University scientists leading NASA-funded research into volcanic ash impacts warn that in addition to the direct damage to infrastructure from the ash layer and tsunami, the thick ash blanket presents extraordinary health and environmental hazards—amplified by seawater's interaction with the ash particles.

The researchers warn drinking water may be contaminated and medium-term impacts to small-scale agriculture may cause acute and chronic threats to health and livelihood on Tonga.

Adrian Hornby, a postdoctoral research associate on the NASA project, says the presence of seawater in a volcanic eruption can create toxic elements in ash.

"The involvement of seawater in the eruption releases enormous amounts of volatile species, for example, chlorine, into the ash plume. Together with gases released from the magma, this creates a cocktail that readily forms salts and acidic brines on the ash particles.

"Previous studies at Hunga Tonga-Hunga Haʻapai have shown that the ash carries some of the highest burdens of salts ever recorded, which may contain highly toxic species such as sulfer, chlorine and fluorine. These salts get deposited with the ash and can be easily leached by rainfall, causing an immediate hazard to water quality, agriculture and the natural environment."

Matthew Pritchard, professor of remote sensing and a co-principal investigator on the NASA project, says water and magma also produce very fine ash particles that can spread over a broad region:

"There are preliminary reports that hydrogen chloride concentrations have been detected by satellite at higher than usual levels in the atmosphere over Tonga. Since water-magma interaction produces very fine volcanic ash and the ash plume appears to have reached at least 20 km altitude, I expect the ash will disperse over a much broader region than previous eruptions."

Natalie Mahowald, professor of engineering and principle investigator on the NASA project, says previous eruptions have produced iron-rich ash and the release of iron and other elements into terrestrial and marine environments can cause dramatic ecological impacts. "Volcanic ash can contain both pollutants and nutrients, which can shift the ecosystems in dramatic ways."

Esteban Gazel, professor of geochemistry and a co-principal investigator on the NASA project, says that when volcanoes erupt underwater—known as a Surtseyan eruption—it usually creates small ash clouds, but this is "something very different." He says:

"We expect Surtseyan eruptions to produce relatively small ash clouds since the eruptions are generated by single violent explosions when seawater vaporizes on contact with magma, but we are seeing something very different from the Hunga Tonga-Hunga Haʻapai eruption. Satellite data and images from across Tonga show that a lot of ash that was propelled 20-30 km height in the atmosphere and has left a thick blanket across Tonga.

"We are studying the composition and chemistry of dozens of ash samples and linking these to their environmental effects. Examining ash from the Hunga Tonga-Hunga Haʻapai offers the opportunity to rapidly assess the hazards and impact of this extraordinary eruption.

"Volcanic eruptions are a major force of creation and destruction and their impact on society crosses political boundaries. To avoid surprises in the future, there needs to be an effort to instrument every volcano on the planet. This will provide the data needed to asset the risk, monitor activity, and forecast eruptions in the future."